VMware happy for VSANs to work alongside actual SANs 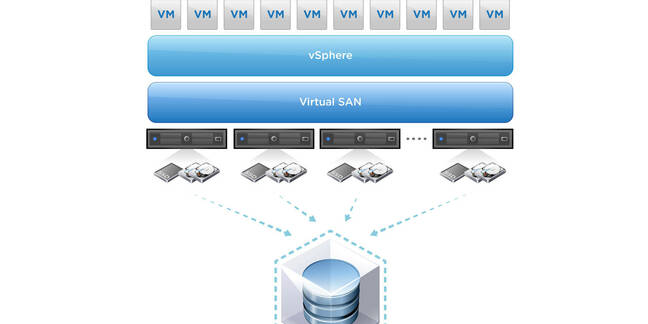 When VMware launched its virtual storage area network (VSAN) a couple of weeks back, other software-defined storage players suddenly wanted to get in touch with El Reg to share their feelpinions on the topic.

One such, Atlantis, was keen to let us know that its ILIO virtual-machine-acceleration kit could help out VSAN users by pointing the software at a real SAN or NAS, rather than the servers-full-of-disks VMware's touting. The general idea seems to be that if you really want to go to software-defined storage, doing so with kit you already own may be an attractive proposition.

That idea was filed in Vulture South's “stuff to grok properly and follow up” file. At least until this post from Virtzilla strategist Chuck Hollis titled “Using VSAN With Storage Arrays” pointed out that VSAN users of his acquaintance are already using VSAN in concert with actual SANs.

Hollis calls this “'VSAN plus', as in 'VSAN plus (insert name of familiar storage array)'” and explains that VSAN can act as both a tier of storage and the tool with which to control tiering.

“The idea of tiering storage behind larger application environments is nothing new, really,” he writes. “One could argue that we’re now just doing it with two distinct storage architectures: familiar storage arrays, and newer hypervisor-converged storage stacks such as VSAN.”

An example of this arrangement in action would see personal data associated with virtual desktops live on a physical array where they can take advantage of all the goodness on offer, but the VDI images and other data that make the most difference to the user experience live on a flash-heavy VSAN.

Hollis thinks that this also makes sense from an operational point of view, writing that “... storage that’s associated with day-to-day needs is provisioned and managed by the same team that does so for compute, memory, server images, etc. And storage that contains the family jewels continues to be managed by the same storage professionals as before.”

The VSAN Plus argument is a little self-serving: the competitive overlap between VMware and EMC raises many an eyebrow and there's been little or no suggestion that VSANs would not co-exist with their physical predecessors. That former EMCer Hollis can find an ongoing role for conventional arrays and the admins that run them should therefore come as no surprise.

On top of Atlantis' virtual and physical SAN span plan, Hollis' post signals that VSAN is at the very least sparking some interesting thinking. ®