BOFH: On the PFY's Scottish estate, no one can hear you scream...

If a tree falls in a forest, and Simon's behind you with an axe...

"Yes, sustainable is good. I'm thinking of a mix of solar and wind generation - low carbon footprint building materials, potable and non-potable water storage and filtration in the workspaces, natural and borrowed light..."

"Doesn't it?!" the Architect gushes, stroking his beard happily.

"Where would we put the aircon units?" the PFY asks. "Only I notice that in the 'roofspace natural retreat environment' they don't seem to be pictured?" 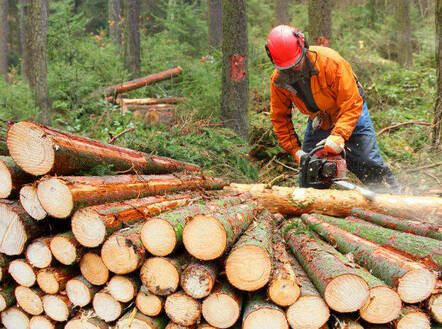 "Oh we'd never compromise the retreat environment for the sake of plant. No, the retreat environment is designed to be a wellness centre - a place of refuge and nourishment, if you will. Planter boxes with small herbs, companion planting, that sort of thing. Besides, we'll be using evaporative cooling in combination with recovered heating and cooling from passive temperature storage units."

"And the server room?"

"Oh we'd do away with that. Everything's done on the Cloud these days anyway - it makes sense to do it all virtually," said the Architect.

"I suppose you're right," I say. "So where will the solar panels and wind turbines be going if we're not going to compromise the retreat environment for the sake of plant?"

"Well half the window elements will include solar cells, so the whole front side of the building will be generating power for part of the day."

"And the wind power?"

"I've not got around to that yet but it may be raised at some height above the roof space - perhaps within an aerial hide - to keep it clear of the retreat environment."

"You mean a hide like where we could've put the aircon?" the PFY asks.

"No, like I said, we'll be using evaporative cooling - it'll double as a waterfall in the greenspace in an effort to create an isolated environment of peace and tranquillity."

"A city with thousands of cars, noise and carbon monoxide..."

"Planting a layered and tiered greenspace around the outside of the building..." the Architect starts...

"...will achieve very little," the PFY finishes. "Not with the noise and fume levels we get here."

"I'm sure we could enclose the space with a low-carbon polyme..."

"...reducing the efficiency of the wind generation dramatically."

"And with 1/2 the window elements being solar panels, won't we have to then put in extra lighting?" the PFY asks.

"In a manner of speaking. See, we take light which would otherwise hit a dead space on a building and channel that to an area that needs light."

"Won't that 'channelling' then start using up some of the actual office space?" the PFY asks.

"Like I said, I haven't gone through everything yet but I'm sure we'll come up with a good solution," the Boss sniffs.

Like most people I don't mind entertaining nutjobs on company time but sometimes they do start to get a little tiresome. The Boss has gone completely off-reservation because one of the greener Board members started talking carbon footprints and environmental responsibility.

Instead of recognising this as the boardroom tangent that it was, the Boss has commissioned some flaky-pastry green architect whose brief seems to be designing an entire building from scratch.

"And this will be a printing station," the Architect continues. "Instead of the traditional model of everyone having their own printers, this will centralise printing resource - with green printers using vegetable-based inks."

"Look," I say, interrupting the PFY's murderous threat. "This company would be the greenest company in the world if - it didn't cost any money, but I suspect that you'll find that the number of board members in favour of this is inversely proportional to the order of magnitude of the cost."

"Yes, except that it's probably more like when it we hit 10,000 quid they'd all abandon ship."

"Well if you want to be greener perhaps we could look at carbon offsets."

"Carbon Offsets," I say, working up a head of steam, "are dumb. I could word it better than that but it's so dumb that the people that support it wouldn't understand those words."

"Analogy-wise, paying someone in South America to grow trees so that I can burn trees is a bit like me paying someone in Uganda 10 quid to be good to someone else so that the PFY can punch you and the Boss here in the face."

"I think that's being rather simplistic - carbon offsets will negate the harm you do in the shorter term while you look for better alternatives," says the Architect.

"Yes, but it doesn't cancel it out geographically. If that were the case I could pay someone in Africa to filter water while I pee in your bathtub!"

"They could pay me to do their carbon offsets," the PFY suggests.

"You don't have sustainable forestry plantations," the Architect blurts.

"Yes I do, I have acres of them in Scotland," the PFY lies.

"Are they CDM approved?"

"So I could actually go and see them?"

"Absolutely. In fact I would insist upon it. You, me, possibly the Boss, a shovel, some lime - it would make a great day out!"

It appears stupidity does know some bounds as our greenie takes on a little of the colour after doing some mental arithmetic.

"I think we'll just stick to the original plan."

"Well, have at it, maestro!" I say, gesturing for the PFY that it's time to be moving on.

"Nutters!" the PFY says as we exit the meeting room.

"You mean after they're all dead - with some token greenification stuff to happen in the next 20 years and all the major changes left till the last few years?" I suggest. "I'm surprised they even stumped up the cash for the consultation."

"Oh, they didn't," the Boss says. "Our director put up 70k of our equipment budget, given that IT is one of the highest power consumers."

"It's not really your money, it's the company's!"

Ten minutes later I'm sending 100 quid to Uganda and the PFY to the Director's office...