Gartner gurus: Storage array market GREW at the end of 2013

Don't forget that came after an abysmal third quarter

According to Gartner: “Worldwide external controller-based (ECB) disk storage vendor revenue totalled $6.3bn in the fourth quarter of 2013, a five per cent increase from $6.0bn a year ago.”

Gartner research VP Roger Cox said: "Following an abysmal third quarter, the fourth quarter of 2013 returned to growth. Driven by pent-up demand and the year-end budget flush phenomenon, the market overcame a fragile global economy and grew a strong five per cent over the same period in 2012.”

The tabular gurus detail vendor shares in this table: 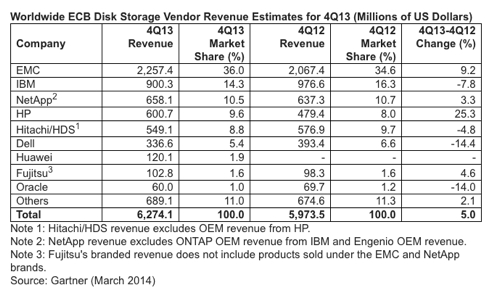 This is more detailed than the equivalent IDC storage tracker tables since it includes numbers for Fujitsu, Huawei and Oracle, which are included in IDC’s ‘Others’ category. However Gartner puts out its storage tracker numbers to the great unwashed at irregular intervals and we don’t have numbers for the third and second 2013 quarters, or the third 2012 quarter - which means we can’t get a picture of the quarterly changes.