IBM PCjr STRIPPED BARE: We tear down the machine Big Blue would rather you forgot

Pics The year 1984 was a watershed for the personal computing market, a year which saw Apple introduce the Macintosh and forever change the way people looked at desktops.

On the 30th anniversary of that January release, there was no shortage of coverage looking at the historic launch of the Mac and its impact on the industry and society as a whole.

But going into the year of the Mac's release, Apple's pet project was not the one that had the industry buzzing. That honor belonged to an IBM project code-named "Peanut." Billed as a home and education port of the monstrously successful IBM PC, the new model was unveiled in late 1983, and its impending release was so highly anticipated that some dealers blamed it for helping trigger a crash in the home computer market before its debut the following year.

In March of 1984, the Peanut – by then dubbed "PCjr" – would finally make it to store shelves. A little more than a year later, however, IBM would kill it off. By that time, the PCjr had already cemented it reputation as one of the most spectacular failures in computing history. 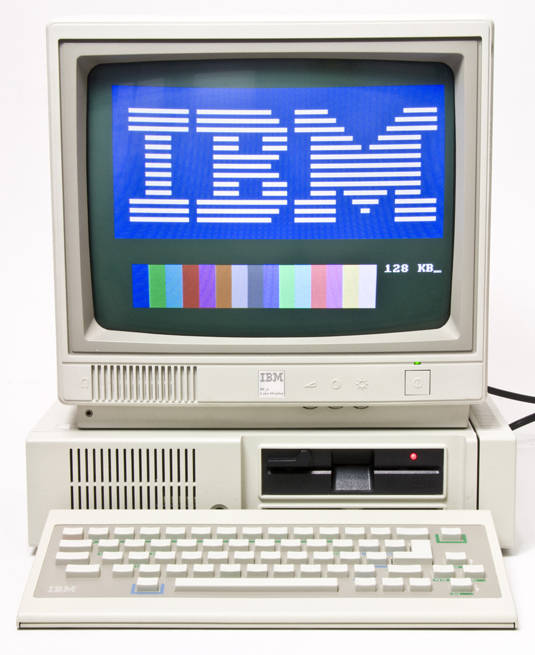 While the Mac went on to stardom and an iconic status that included induction in the Smithsonian, the PCjr has been (quite deservedly) relegated to the dustbin of history, mentioned only in passing when someone needs to put a product flop into perspective.

A number of factors were blamed for the PCjr's demise – marketing failures, poor developer support, and weak backing from IBM have all been cited. The biggest problem with the PCjr, however, was that is wasn't very well engineered. The design of the system was, quite simply, bad.

To "celebrate" the PCjr's 30th birthday, El Reg decided to find out just how limited the PCjr's hardware really was. Luckily, while an original Mac in mint condition with original packaging and manuals can sell on eBay for thousands of dollars, we found a working PCjr complete with monitor and cables for a much more reasonable price: $250 (£151).

After receiving our Peanut, we picked it apart to find out just what went into one of the least successful major-vendor PCs ever built. And vintage computing aficionados need not fret: we've since reassembled our PCjr and she's back to her full working order (what ever that may be).

The PCjr was actually a rather slim machine by early 1980s standards. We used a baseball for size comparison, showing that the system would, as it was intended, fit easily on a small desk or table in the home or cramped office. (For reference, a baseball is about 2.9in or 7.3cm in diameter.)

The front of the machine sports the PCjr's single floppy drive and two cartridge slots. In our case, the floppy is a 1.2MB dual-sided drive from Alps, indicating it was a later release with some premium options added in. Early models sported either no floppy drive at all – software was loaded via cartridge or external tape drive – or a 360KB single-side drive.

The round sensor left of center is the infrared reader for the PCjr's wireless keyboard, a concept ahead of its time and pretty much the only redeeming feature of the PCjr's keyboard (but we'll get into that later.) Fun fact: when photographing the PCjr, we found that the 5000K lights in the studio caused the system to go into a full-on beeping panic as they overwhelmed the infrared sensor. One can only imagine the havoc a teenager could have wreaked with a lab full of these machines and a laser pointer.

Connectivity options on the PCjr were pretty limited: monitor, two joystick ports, lightpen port, serial port, composite video for connection to a TV, audio, and a slot for a modem connection (our system had no modem). Whoever first owned our system wasn't satisfied with those options: they popped for a "sidecar" expansion on the left side which added a parallel port. 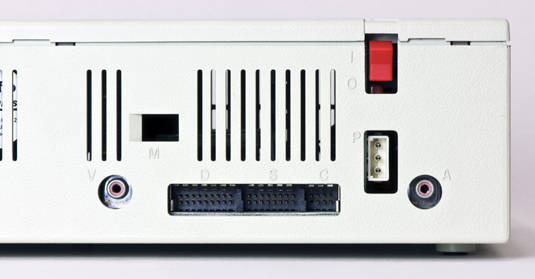 Power input on the center right, display and A/V inputs along the bottom (click to enlarge)

The PCjr's polyphonic audio output is driven by a Texas Instruments TI76496 chip, which combines three tone generators and a white-noise generator, all programmable, to create the final sound. While that may sound – no pun intended – limited in these days of fully digitized multichannel audio, the PCjr's sound was a step up from the simple beeps of its brethren. 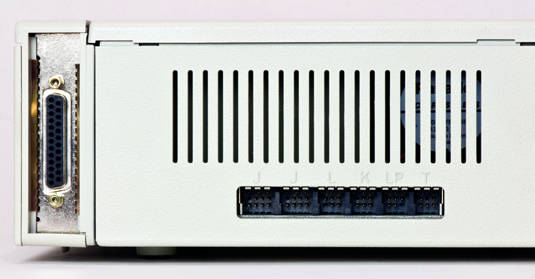