Word does not mean what she thinks it means

The explosion of funding for charities has been one of the distinctive features of the British state in recent years – and it’s highly controversial. In effect, people are chosen and paid to lobby the government itself. Rules on charities have been loosened, and the amount of cash increased, with some 27,000 charities becoming predominantly dependent on the taxpayer (That is, over 75 per cent of such a charity’s income is state-derived). No less than £12.8bn of taxpayer charity funding was sloshing about in 2008.

In its report Sock Puppets the Institute for Economic Affairs thinktank warned of a crisis of legitimacy and authority: the causes these agencies lobby for are often unpopular and would win few votes if put to a democratic test, but nonetheless the charities lobby in their favour and for the expansion of the very departments which fund their efforts.

Such spending has risen unchecked under a Conservative-led coalition government: alongside charities we must now talk of “social enterprises” - a misleading euphemism for bodies which are on state life support, and which would probably not exist without the government money.

In September 2011, the “Minister for Civil Society”, Nick Hurd, announced a £10m fund called "Innovation in Giving", part of a £34m project "to increase levels of social action". The fund winners would be chosen by Nesta, the quango set up in 1997 to distribute the £250m National Lottery cash pile to worthy causes, and Nesta would manage the fund. Nesta became a charity after the 2010 General Election, but retained the endowment.

The winners from the first wave of 630 applicants were announced in February 2012.

Crowdsourcing operations, social networks and other local exchanges were the winners. Today, it’s hard to find a visible success from the list of recipients. Several are dormant. One example, called The Amazings, was funded to become "a platform for older people to share their skills through online and face to face classes". Swapping oldies for hipsters, it now offers fashion courses while its blog passes on fashion and craft tips. 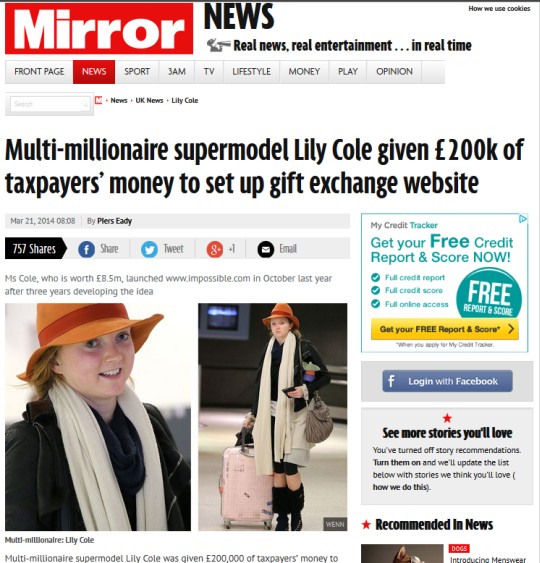 The “social currency” Blue Dot promised rewards if somebody endorsed a charity on Facebook; it gasped its last Tweet in June. Another lucky recipient of the fund, “Good Gym”, has made has one blog post so far this year. Slivers of Time, an even more nebulous “social enterprise” recruitment agency, has made two posts.

Many of these schemes are just poorly thought out, replicating more established sites or services. But it could be argued that if nothing else, the recipients had some kind of focus. The purpose of Lily Cole's Impossible.com was harder to discern.

Next page: What’s Impossible for? That’s an Impossible question to answer, we discovered
Page: