Sick of walking into things while gawping at your iPhone? Apple has a patent app. for that

Look up from your texts while walking? What is this, 1997?

Apple has applied for a patent for technology that will warn of oncoming dangers to users distracted by their text messages.

An application submitted by the company to the US Patent and Trademark Office (USPTO) (rooted out by AppleInsider) describes a user interface that displays transparent text messages over a live video feed from the device's forward-facing camera. 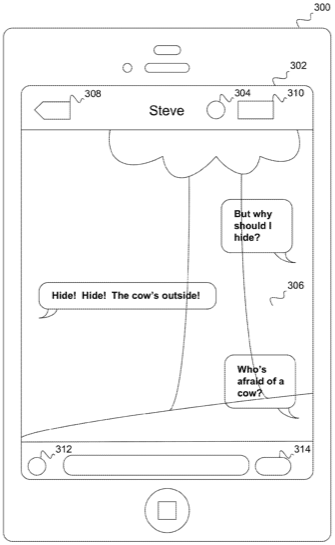 Thus, the tablet or handset can offer a view of what's ahead of the texter, allowing them to avoid anything they would otherwise crash into.

"The background within the text messaging session can continuously be a live and current video image of the view seen by the camera at any given moment," Apple's Stephen Payne wrote in the application.

"Consequently, the device's user is less likely to collide with or stumble over an object while participating in a text messaging session."

As with all patent application filings, we should note that this is only a proposed design from Apple and not necessarily a preview of upcoming features or technologies. Many such filings are never materialized in a prototype, let alone a commercial product. The document was also submitted in 2012, but published this week by the USPTO.

Still, this feature seems far more practical than other blueprints we've seen in the US patent officials' inbox. We can't help but wonder why someone hasn't already done this. Most of us have learned the hard way that staring at a mobile while walking can often end with in embarrassment, injury, or both.

A recent study of user kinesiology found that the mere act of looking down at a handheld device while walking changes a person's gait and decreases the ability to maintain a straight line while walking even when a collision is not imminent.

Until Apple can get this world-changing alert system onto the iPhone, it seems that the best way to avoid these hazards is to take the drastic but effective measure of not constantly staring at your phone and actually looking up to your surroundings while walking.

You've accused Apple of patent infringement. You want to probe the iOS source in a closed-room environment. What to do in a pandemic?

Judge lays out rules from one-time passwords to window snooping

Apple grudgingly opens up its check book, pays VirnetX $454m in patent royalties after a decade of wrangling

Supreme Court rules against Huawei in long-rolling Unwired Planet patent sueball: Take the licence terms we set or else