CERN team uses GPUs to discover if antimatter falls up, not down

Einstein's General Relativity theory may be in for 'a big surprise'

GTC In the next year or two, researchers at CERN's Large Hadron Collider (LHC) should be able to answer one of the most fundamental questions bedeviling physicists: what is the effect of gravity on antimatter?

As we all learned back in high school, matter falls to Earth at an acceleration of 9.8 meters per second squared, and according to the weak equivalence principle (WEP), that acceleration is the same for all bodies independent of their size, mass, or composition – in a vacuum, of course.

But is the same true for antimatter? Or does it fall faster, slower – or, possibly, does it "fall" upwards, away from the gravitational force?

No one knows – but an international group of European researchers, the AEgIS Collaboration – Antimatter Experiment: gravity, Interferometry, Spectroscopy – aims to find out with the help of the parallel-processing powers of GPUs.

"The principle of equivalence between gravitational and inertial mass is a foundation of General Relativity," explained Akitaka Ariga of the University of Bern, Switzerland, at last week's GPU Technology Conference (GTC) in San José, California.

"General Relativity is a very fundamental role in our physics, invented by Einstein," Ariga said, "but when Einstein made this theory, he didn't know that antimatter existed in the world."

Until now, there has been no need to adjust the theory of General Relativity to account for the behavior of antimatter in a gravitational field because no one has been able to measure that behavior – and that's the information that Ariga and the AEgIS Collaboration aim to supply, with a goal of accuracy within one per cent.

"We then measure how much it falls," he said, "and it is expected that it [will be on the] order of 10 microns it will fall. Or it may fall up. So if we find that it falls up, this is a big surprise and big discovery."

From the AEgIS Collaboration's point of view, that's the easy part. What is a challenge, Ariga says, will be wrangling the enormous amount of data produced by the experiment, which will produce 3D images of grains in the photographic emulsion excited by the tracks of particles resulting from the energy released by the antimatter-matter annihilation. 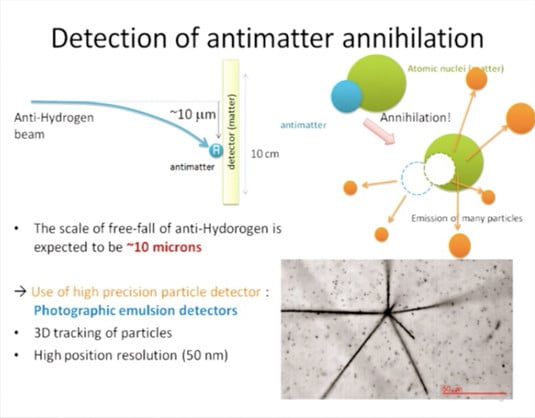 Photographic-emulsion detectors have a long and successful history, Ariga explained, having been successfully employed as far back as French physicist Antoine Henri Becquerel's discovery of natural radioactivity in 1896. The 3D nature of the AEgIS experiment, however, coupled with the high resolution of the photographic-emulsion detectors used, creates data sets on the order of 10 terabytes for a 50 micron–thick, 10-centimeter-by-10-centimeter 3D target.

"And usually we use more than one square meter of detectors," he said, "and it's quite a lot of data – usually it exceeds a petabyte."