Firm to pay $57m to investors 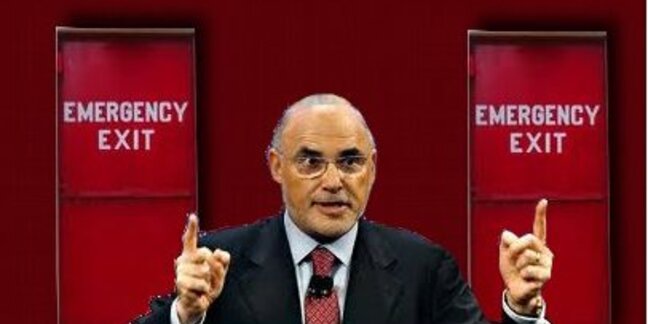 HP has agreed to pay $57m to shareholders miffed by the management of Leo Apotheker. This comes after the plaintiffs sued the firm for defrauding them by abandoning its business model.

The investors launched a class action suit after former chief Apotheker shocked them, and the rest of the tech world, by announcing plans in August 2011 to completely change how the business was run.

The total shake-up included plans to get rid of WebOS, buy Brit software firm Autonomy for $11.bn, stop selling the TouchPad, which had only been on the market for around two months, and, of course, potentially spin off the company's PC business.

The stunning news sent the firm's shares rocketing for the bottom, dropping around 20 per cent of their value in just 24 hours. Shareholders complained that they'd had no hint that WebOS was on its way out or that the management was considering ditching PCs and that HP execs had hidden their concerns about the future of the firm's business model.

The following month, Apotheker was ousted from the top seat at HP in favour of Meg Whitman, in part because of the way the company "communicated" its decisions on WebOS and the PC biz. And in the same month, shareholders including US pension funds and German investment firms filed their suit.

The proposed settlement of the suit came after "serious, extensive arm's length and non-collusive negotiations", according to a filing with the court yesterday.

The $57m, which will go into an interest-earning escrow account within 20 days of being approved by the judge, will go towards covering people or companies that bought shares in HP between 22 November, 2010 and 18 August, 2011.

“HP has reached a mutually acceptable resolution through a mediated settlement," a spokesperson said. ®

Autonomy Trial We're honestly not making this up

Get this: Mad King Leo wanted HP to slurp two other firms alongside ill-fated Autonomy buyout