Just transplant phone guts into a 27-inch iMac, remove its stand, and be done with it

Apple's Asian suppliers will begin producing 4.7-inch displays as soon as next month for a next-gen iPhone release this fall, but 5.5-inch displays for an even bigger Cupertinian handset are said to be delayed due to production problems.

So reports Reuters, citing supply chain sources – which, as Ars Technica astutely points out, "could mean anything from a Foxconn vice president down to a factory janitor."

Reuters also says that their talkative sources say that Apple has chosen three different suppliers for the displays: Japan Display, Sharp, and LG Display, but which company is producing which display was not mentioned.

It should be noted that Japan Display – which Reuters sources say will begin production for Apple this May, the earliest of the three – announced last Thursday that it would begin shipping 5.5-inch, 2,560-by-1,440-pixel, 538-ppi screens this month.

That company did not reveal in its announcement, however, whether those high-res beauties would use a film-based multitouch sensor or the more technically challenging – but thinner – in-cell touch sensor tech used in in the iPhone 5, 5s, and 5c's 4-inch, 1,136-by-640-pixel, 326-ppi displays. 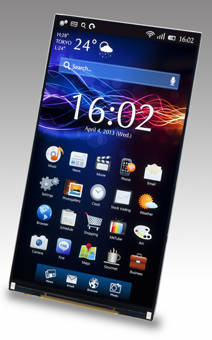 Although a 4.7-inch display is a notable step up from the 4-inch display in the iPhone 5, 5s, and 5c, Samsung's flagship Galaxy S5 has a 5.1-inch, 1,920-by-1,080, 432-ppi display that the übergeeks at DisplayMate called "the best performing smartphone display that we have ever tested" that has "raised the bar for top display performance up by another notch."

Apple has been roundly spanked for sticking to smaller displays in its iPhones. Although some users – one of whom, full disclosure, is this Reg hack – prefer the compactness of the iPhone's 4-inch display, the rise of video viewing and mobile gaming on handsets presents a strong argument for Apple to expand its iPhone line to include larger displays such as those Reuters' sources say are coming, 4.7 inches first, then 5.5 inches.

But if they do, may we humbly suggest that they keep a 4-incher in the line for those of us who use our phone as a phone more than we use it as a mobile home entertainment center? ®