OkCupid falls out of love with 'anti-gay' Firefox, tells people to see other browsers

Says it wishes 'enemy' firm 'nothing but failure'

Eich, a Mozilla co-founder and the creator of the JavaScript programming language, reportedly donated $1,000 to a campaign in support of Proposition 8, a 2008 California ballot measure that made same-sex marriage illegal under the state constitution.

Although the measure was passed in a general election, it was ultimately struck down as unconstitutional by a federal district court.

The revelation of Eich's support for the measure has prompted several prominent web developers to call for a boycott of the Firefox browser until such time as Eich steps down as Mozilla's chief executive.

On Monday, OkCupid joined the protest by posting an open letter to its homepage that only appears when the site is visited with a web browser declaring itself to be Mozilla Firefox. In the note, the dating site urges its users to switch to a different web browser:

If individuals like Mr. Eich had their way, then roughly 8% of the relationships we've worked so hard to bring about would be illegal. Equality for gay relationships is personally important to many of us here at OkCupid. But it's professionally important to the entire company. OkCupid is for creating love. Those who seek to deny love and instead enforce misery, shame, and frustration are our enemies, and we wish them nothing but failure.

Firefox users can click a link at the bottom of the letter to continue on to the main OKCupid site. But the letter also includes links where users can download alternative web browsers, including Chrome, Opera, and IE – the latter of which OkCupid amusingly calls "Internet Exploder." 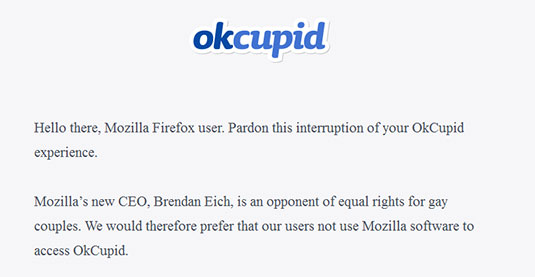 Last week, Eich blogged that he was working with "LGBT individuals and allies" to craft inclusive policies at Mozilla and said that Firefox users should expect to see "exemplary behavior from me toward everyone in our community, no matter who they are."

And on Saturday, Mozilla posted an official statement of its policies regarding same-sex relationships, in which it cited its own Community Participation Guidelines, which welcome participants regardless of their sexual orientation.

But such affirmations apparently weren't enough for OKCupid, which wrote that even though Eich's monetary contribution in support of Proposition 8 happened six years ago, his "boilerplate statements in the time since make it seem like he has the same views now as he did then."

When asked for comment on the matter, a Mozilla spokesperson told The Reg, "Mozilla supports equality for all, including marriage equality for LGBT couples. No matter who you are or who you love, everyone deserves the same rights and to be treated equally. OkCupid never reached out to us to let us know of their intentions, nor to confirm facts." ®