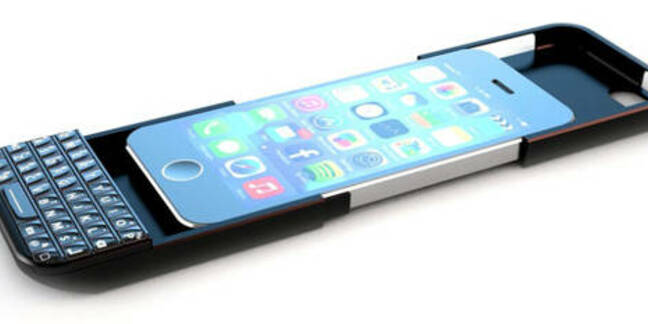 Troubled mobe maker BlackBerry has received a welcome bit of good news from a California court, which has blocked sales of a physical iPhone add-on keyboard the company says copies its hardware.

A Northern California District Court judge on Monday granted an injunction that prevents the sale and import of Typo keyboards for Apple iThings.

BlackBerry alleged that the Typo keyboards, which fit over the back and bottom portions of the iPhone and add a physical keyboard to the otherwise touchscreen Apple device, infringe BlackBerry's protected designs for its own QWERTY keyboard phones. Typo has become less known for its actual products and more known for its co-founder: American Idol host Ryan Seacrest.

The Company Formerly Known As RIM was quick to file suit against Typo on claims of patent infringement and what the BB OS 10 maker says is a "blatant" copy of its hardware. Typo has countered that BlackBerry's claims of infringement are invalid and unenforceable.

In an opinion [PDF] issued by Judge William Orrick, BlackBerry offered enough evidence of infringement to warrant a preliminary injunction while the main lawsuit rumbles on. Under the terms of the ruling, Typo must refrain from "making, using, offering to sell, or selling" its products and brand in the US. Similarly, the injunction blocks the company from marketing the products.

"Typo’s keyboard directly targets the segment of smartphone users that prefer a physical keyboard, the market in which BlackBerry competes," Judge Orrick wrote.

"Indeed, Typo’s founder has openly explained that the catalyst for the Typo keyboard was the realization that many people carry two phones, one for typing and correspondence (the features that drive demand and goodwill for the BlackBerry) and an iPhone for everything else."

Typo did not respond to a request for comment on the matter.

BlackBerry has, for the most part, steered clear of the patent infighting which has gripped much of the mobile sector. While rivals such as Apple and Samsung continue to bicker over allegations of infringement, BlackBerry has stayed out of the fray.

A lack of legal woes is about the only thing BlackBerry has going for it these days. The company's revenue dropped below $1bn in its last fiscal quarter as financial losses continue to mount and what was once a stranglehold over the smartphone sector has turned into a minuscule share of the overall market. ®