Down at the “basic research” level, there's a lot the labs can accomplish with quantum mechanics: entanglement, information teleportation, simple quantum computations and more. Now, an international collaboration believes it's brought exploitation of quantum effects closer to a commercial development.

The researchers have created what they hope lays out the “yellow brick road” they need to follow to create a single integrated source of single photons – ultimately at high enough output rates to permit quantum communications in the megahertz range.

As the Macquarie University release explains, the devices “combined passive glass routers created by femtosecond laser writing, nonlinear waveguides in a highly advanced chip, and fast optical switching elements. The photons were generated in a lithium niobate chip developed in the group of Professor Sébastien Tanzilli and Dr Olivier Alibart at the Université Nice Sophia Antipolis. Femtosecond laser-written glass circuits produced at Macquarie were used to embed the Nice chip into the larger experiment.”

“The key problem is that most of the time you get nothing, sometimes you get single photons, and other times you get multiple photons.”

In essence, most sources of single photons have an unusable output most of the time. “By introducing the switching process – that was Sydney University's contribution – we reduce the number of zeroes and the number of multiple pairs,” Steel went on.

Building on work last year that demonstrated a reliable source of photon pairs, he said, PhD student Thomas Meany has demonstrated that the system can be scaled up. Meany has, he said, “moved the switching technology from a curiousity into something that's scalable – it turns the stochastic photon source into a deterministic source.” 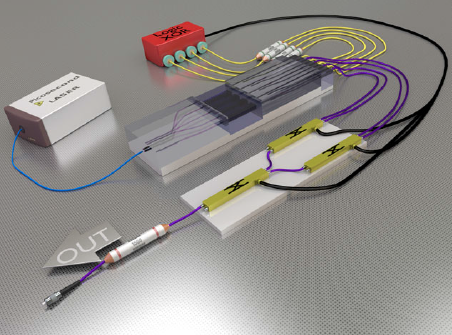 Meany told The Register that realising a photon source as a component has potential applications both in quantum communications and quantum computing.

A high-quality source of single photons that can be entangled for information teleportation “is a hot application of what this sort of system is projected to be used for,” he said. In computing systems, “we would expect this sort of technology would form a core unit to produce qubits in a quantum computer. A series of these devices would product a series of qubits, which is a key challenge of optical quantum computing.”

Steel added that the device could also form the basis of repeaters in quantum communications systems. “The process of amplification introduces noise,” he said. “In the quantum system, the noise is as big as the single photon, which destroys the information.

“We imagine a product like this as being able to sit in a quantum computer, a quantum relay, every hundred kilometres or so.”

While The Register can't claim any deep understanding of quantum mechanics, the idea of a quantum repeater seems to violate the notion that you can't observe (including amplify) an entangled system without destroying the entanglement.

The problem, Steel said, is that the no-cloning theorem means you can't copy a quantum state without destroying it. The repeater workaround, he explained, is to establish an entangled pair on each of the links in a “repeatered” system.

Right now, the output rate of the device is in the tens of Hertz, but Steel says this will improve.

“Photons might be generated at tens of kilohertz or faster, but few of them make it out of the chip – coupling them into the fibre is difficult, and so far, detectors are not especially efficient.

“We can infer that the on-chip rate, which we can't observe directly but can infer, is in the hundreds of kilohertz to megahertz rate. As more of the technology moves on chip, the losses will improve,” he said.

The work is available at Arxiv here, and is to be published in Laser & Photonics Reviews. ®