Fujitsu claims you don’t need to buy special all-flash systems for performance, get it from its cheaper all-flash mid-range DX200 array instead.

Fujitsu says “in contrast to expensive all-flash arrays based on special architectures, the Fujitsu ETERNUS DX200 S3 uses a high performance standard system architecture, helping to cut system purchase costs by up to 80 per cent.” 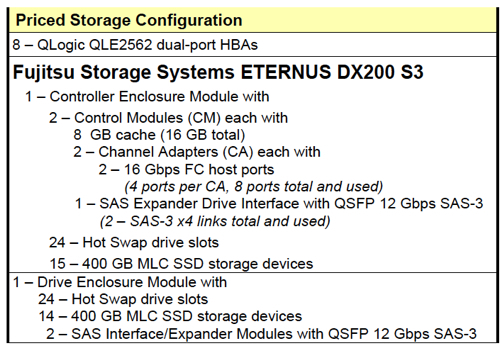 A chart of SPC-1 benchmarked systems ranked by IOPS shows where the all-flash DX200 S3 is positioned: 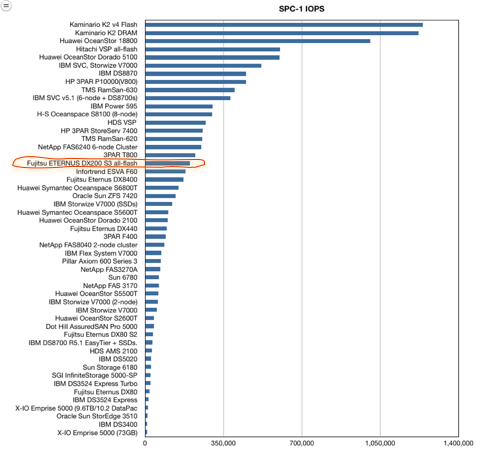 What can we glean from this? The S3 DX200 is faster than the ETERNUS DX400 systems, which are positioned higher up the ETERNUS array range - or were. They were replaced with DX500 systems in November last year, when the DX200 and other S3 were introduced. Here’s a table showing what happened then:

Secondly, the results puts the mid-range DX200 above an IBM V7000 and a NetApp FAS8040 2-node cluster, and in the same ballpark as an HP 3PAR T800 and six-node NetApp FAS6240 cluster. These latter two are oldish systems though. It makes us interested in seeing what all-flash versions of Fujitsu’s larger DX500 and DX600 would do.

There are no SPC-1 figures for what Fujitsu describes as very expensive all-flash arrays based on special architectures – which we think means arrays from Pure Storage, SolidFire, Nimbus Data or Violin. We can’t compare them with the DX200 S3 using SPC-1 numbers as none of them have publicly available SPC_1 results - which is a pity. Neither can we compare the DX200 to EMC’s XtremIO or Cisco’s Invicta for the same reason.

Neither do we know how an equivalent all-disk DX200 would perform, which is another pity. Still, the flying all-flash DX200 looks good and, if you want a quick and easy-to-install all-flash system, Fujitsu says this is it.

By the way, we understand an all-flash FAS array is coming from NetApp. That should liven things up. ®