Does my mass look big in this? Roly-poly galaxy El Gordo more porky than first feared

Hubble gets an eyeful of fattest cluster on record

Pic The latest data from the Hubble space telescope has shown that the furthest fattest galaxy yet spotted is 43 per cent more massive than first thought and was formed by two huge galaxies colliding. 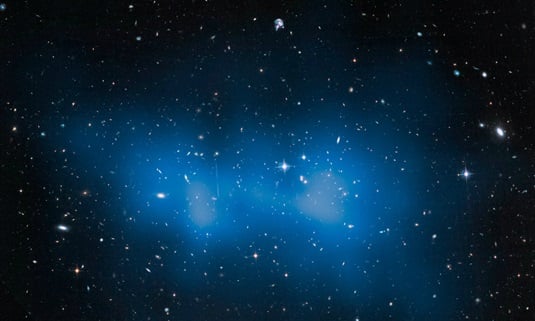 Galaxy with a weight problem, for astronomers at least

Huge galaxies aren't unknown in the universe, but they tend to be a more recent phenomenon. El Gordo is the furthest yet found, and the Hubble data shows it is three quadrillion times the mass of our sun. NASA also reports that the viewing angle we have means El Gordo could be hiding even more mass out of sight.

"We can tell it's pretty big, but we don't know what kind of legs El Gordo has, so we need to have a larger field of view to get the complete picture of the giant," said Professor Felipe Menanteau, from the University of Illinois' department of astronomy.

Further complicating matters is that El Gordo looks to be the product of two massive galaxies colliding, and is still reforming into its new shape. Given how long it has taken its light to reach Earth's instruments, the Fat Man could be more massive than this new estimate suggests.

"We wondered what happens when you catch a cluster in the midst of a major merger and how the merger process influences both the X-ray gas and the motion of the galaxies," explained John Hughes of Rutgers University. "So, the bottom line is because of the complicated merger state, it left some questions about the reliability of the mass estimates we were making."

NASA is now rescanning the galactic cluster, and that will take a little time. El Gordo is so large that the Hubble has to scan separate sections at a time and then merge the images, and scientists have to account for the gravitational lensing caused by the mass of the galaxy.

"What I did is basically look at the shapes of the background galaxies that are farther away than the cluster itself," explained James Jee of the University of California at Davis. "It's given us an even stronger probability that this is really an amazing system very early in the universe." ®