BEHOLD the HOLY GRAIL of TECH: The REVERSIBLE USB plug

First pic Intel has been showing off the next generation of USB connectors which will be the first to fit into ports whichever way up they are – thus avoid the Schrödinger's USB stick problem.

The chip giant says the final specification will be locked down by July by the USB Implementers Forum, of which Intel is a member.

In a presentation [PDF archive] at the Intel Developer Forum in China on Thursday, the new USB Type-C plug was shown off and its specifications detailed. The 8.3mm-by-2.5mm connector, similar in size to today's micro-USB plug, will be capable of transferring data at 10Gbps, and delivering power up to 100W – from 5V at 2A for handhelds, to 20V at 5A for workstations and hubs.

According to Intel, the current Type A and Type B USB connectors are too bulky for use in the next generation of computer and tablets, and the small size of the Type C connector, as well as its enhanced data and power capabilities, mean it will be ideal to replace not only existing USB cables, but also AV and charging cables as well. 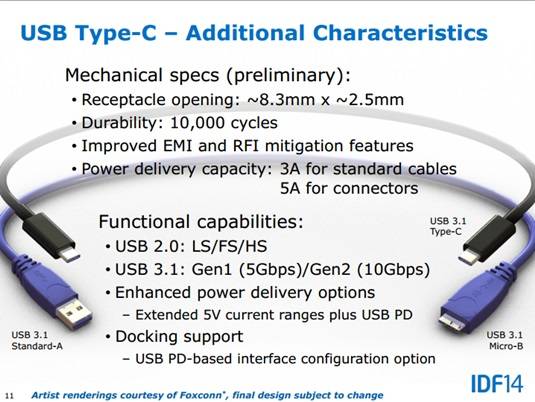 The new plug will support both USB 2.0 and 3.1 standards, and can be used with current wider cables via an adapter. Once the specification is locked down in July, manufacturers can start building them into products.

There's going to be an annoying lag between the lock-down and actually getting your paws on the new cables. Generally it takes at least a year before the new cabling will hit the streets, but the appeal of the new cable may convince manufacturers to get moving faster on this one.

Apple users already have the kind of reversible plugs that many USB users crave: its Lightning plug has had the feature for over a year. It seems the rest of us will have to wait a while for that fumble-free connection. ®

Serial killer spotted on the night train from Newcastle

Bork!Bork!Bork! Remember when all we had to complain about were crappy rail services?

Apple forgot to lock Intel Management Engine in laptops, so get patching

Bloke alleges boss 'thrust his bum' at him