Another cheery plug for Amazon S3

Bezos' boys will be pleased while data centre storage admins become fearful; Avere has run a file access benchmark showing file access to Amazon S3 in the cloud is the same as WAN file access to a ZFS data store - and Cleversafe object storage.

It claims that it is the first and only vendor to provide low-latency, scalable NAS performance for public and private cloud storage equivalent to that with legacy NAS.

Avere builds FXT filer accelerators, in-line multi-tiered caching devices for for file reads and writes. It first provided support for file stores in the cloud by offering an Amazon Glacier back end in November last year, effectively turning the FXT product into a cloud storage gateway.

It called the feature Cloud NAS and both a Cleversafe private cloud and the Amazon S3 public cloud were supported as well as Glacier. (Read Avere's pdf here.)

Cleversafe provides dispersed object storage and the FXT box becomes a NAS gateway to it, talking to Accessor data routers through an object API. They slice incoming objects (files) up into slices and store them and their metadata across a network or grid of Slicestor storage nodes.

Now Avere has run SPECsfs2008 NFS benchmarks comparing the speed of accessing ZFS storage across a WAN, private cloud Cleversafe storage and Amazon S3 public cloud files. Both S3 and have effectively the same performance. Here is a table of the basic data:

We see that a 3-node FXT 3800 cluster was used in all three cases and that a base was established using an Open ZFS storage server with a 150msec WAN latency added to the access. Without this we can assume the throughput would have been higher. According to Rebecca Thompson, Avere's marketing VP, the reason for doing this was to ensure a level playing field and to compare apples to apples rather than an on-premise ZFS store with a remote cloud NFS store.

Thompson said a similar latency was added in for a previous FXT 3800 benchmark .

With the ZFS baseline established at 180,043 SPECsfs2008 NFS IOPS, Avere recorded 180,394 IOPS with the Cleversafe configuration and 180,141 with the S3 configuration; pretty much the same

These have been added to a graph of SPECsfs2008 NFA results: 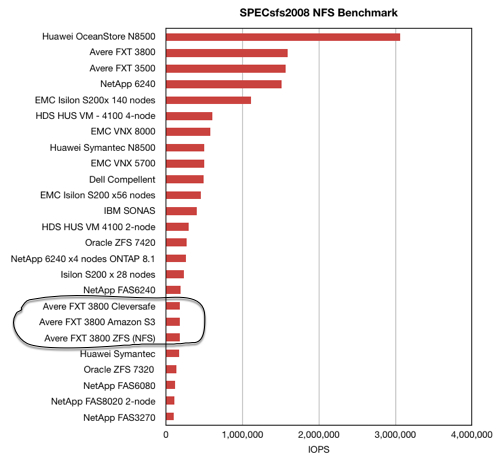 We can see that an Oracle ZFS 7320 system delivered 134,140 IOPS. This was without WAN access and took place in March 2012. The configuration included six 512GB SATA SSDs for read acceleration and six SAS-2 73GB SSDs for write acceleration, on top of 44 x 300GB 15K hard disk drives for the basic capacity. This was not a slow system and having an Avere FXT 3-node cluster delivered more IOPS and with less latency; 0.87ms vs 1.51 ms is pretty impressive.

Does Avere think this is good enough for primary data to be stored in S3 or on a Cleversafe object storage system? Thompson said yes, but qualified that: "You have to have the most active data in the FXT nodes with more persistent data written back to the cloud."

El Reg's storage desk points out that you wouldn't have primary data on the Cleversafe system anyway as it's an object store and so it is relatively slow compared to a filer.

Avere states that cloud storage "provides infinitely scalable capacity with [the] lowest cost, simplest management and highest reliability." If the performance here is good enough then it implies you could consider moving your file storage to Cleversafe or S3 and save money and management time, and enjoy better data reliability.

We might imagine some raised eyebrows and resistance in SPEC circles to the idea of running a cloud filer benchmark as it could be seen to encourage storing files in Amazon's cloud and not on local filers.

Having done this, Avere is thinking of extending its roster of back-end stores to include other object storage systems and possibly Azure and Google clouds. S3 was the first public cloud because it has critical mass.

That's the big question, isn't it? Will service-focussed private cloud data centres endure against the siren appeal of public cloud data centres? Does Amazon's cloud rise (and Google and Azure, and wannabes like Verizon and Cisco) equate to central IT admins' job prospects declining? What do you think? ®