IBM built its own circuits for S/360, Solid Logic Technology (SLT) - a set of transistors and diodes mounted on a circuit twenty-eight-thousandths of a square inch and protected by a film of glass just sixty-millionths of an inch thick. The SLT was 10 times more dense the technology of its day.

IBM built its own plant to manufacture the SLTs at a site in East Fishkill in the Hudson Valley, and by 1965 was making 28 million to keep up with demand. It built so many that 25 per cent failed quality control. Years later, East Fishkill became a major IBM chip manufacturing plant.

Memory in the S/360 was standardised on something new called magnetic core. A variety of technologies had been in use by different computer companies, including IBM. These included large and bulky drums filled with mercury through which electronic pulses were sent and amplified, cathode ray and thin-film memory. None were 100 per cent reliable and all had their problems.

Magnetic core was new, and it was digital: a set of tiny doughnut-shaped metal circles in a wire honeycomb that would be magnetised and stored zeros and ones. 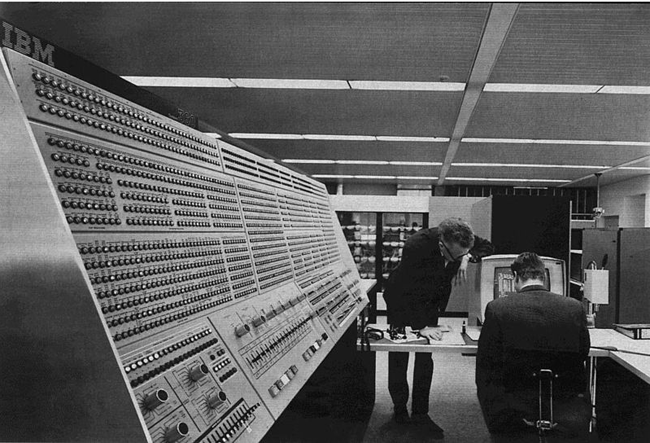 IBM bought into magnetic core in a very real way, acquiring one patent in 1955 from An Wang and paying MIT for another patent from Jay Forrester in 1964.

Storage was via a disk drive, the IBM 2311 that looked like an old-style, top-loaded washing machine or spin dryer. The 2311 stored up to 7.25MB on a single, removable disk and came with an IBM-standard interface.

Not everything was invented for the S/360 or came from IBM. Disk storage dated from IBM's 305 REMAC - Random Access Method of Accounting and Control machine - in 1956. COBOL - a staple of mainframe applications - dated from 1959 and was based on the work of ENIAC and UNIVAC programmer Grace Hopper.

Nothing is simple in IT and dreams never arrive as predicted, and so it was with the S/360.

Building the software was one of IBM's biggest headaches. Developing and delivering the S/360 cost $5bn, not the $675m IBM estimated it would in 1962. Of this, $4.5bn went on new facilities like East Fishkill and on buying and renting equipment.

Of the remainder, software was the single biggest hit. The cost had been estimated to come in at $30m and $40m. The final number was $500m.

The problems were numerous and saw the Operating System 360 go months late. Among the challenges were making new innovations work together and making the system upwards-compatible and able to run two or more programs simultaneously and also take inputs from more than one different users.

A thousand engineers toiled to eventually produce one million lines of code.

Also, time-sharing didn't arrive until the S/360-67, announced in 1965 and not delivered until 1967 – IBM had preferred batch processing.

For the customer, though, the S/360 was a success. It meant large-scale computing power was something businesses could do more than just run their business on, they could run new business, too. The S/360 was a multi-purpose rather than a one-user product suited to just a single function. Up to 248 data transmission terminals could communicate with the computer, even when it was busy on a batch job. It was not only capable of working on small binary, decimal or floating-point calculations, it could also process scientific and/or commercial jobs.

Early adopters included the Ford Motor Company, which was able to introduce a warranty system and a retail loan system using its S/360.

Before the S/360, memory and storage were in short supply and expensive to add. The S/360 gave large and relatively unlimited volumes that were easy to slot in, with a central memory capacity of 8,000 to 524,000 characters. 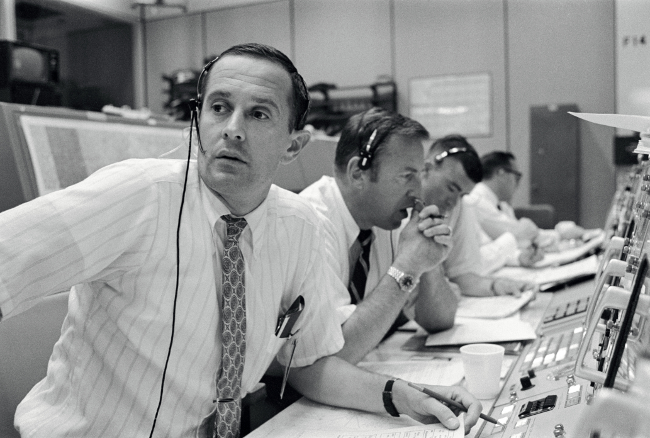 NASA's Apollo 11 Capcom team who got the first men back from the moon using an S/360.

As it entered the 1970s, IBM claimed 70 per cent of the world's mainframe market – with customers including Ford, Volkswagen McDonnell Aircraft Corporation and NASA. On the latter, a total of five S/360s had helped run the Apollo space programme, with one of IBM's mainframes being used to calculate the data for the return flight of Neil Armstrong, Buzz Aldrin and Michael Collins - the team that put boots on the Moon for the first time.

By the late 1960s and early 1970s, the original S/360s were being replaced by newer mainframes, but the momentum had carried IBM through the decade.

IBM was so far ahead of the competition, observers began to brand it the Seven Dwarfs or the BUNCH. This moniker referred Burroughs and Univac - which merged to create Unisys in the 1980s; Control Data Corp (CDC); General Electric, which sold its business to Honeywell; and NCR and RCA.

IBM's lead was too much for some in the US government, though. The US Department of Justice (DoJ) began antitrust proceedings in 1969, alleging IBM was operating an illegal monopoly in the mainframe market.