That extra acreage makes reading in landscape mode a boon as most ebook reader apps show a proper two-page layout, which I much prefer to the one-at-a-time view. Web browsing and video viewing, too, are hugely immersive and pleasurable experiences. I've had the Pro running for hours on end streaming content from iPlayer and Netflix and I’ll admit, I’ve never used a tablet so intensively. 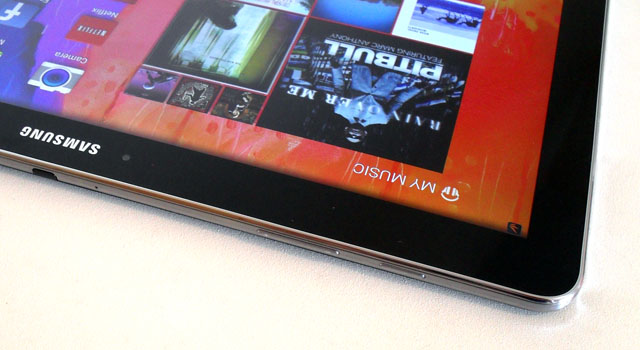 And it’s not a half-bad screen either. The Super Clear LCD display has a resolution of 2,560 x 1,600, so it’s plenty crisp enough even if the resultant pix density of 247ppi can’t match the 299ppi of its Samsung stablemate, the Nexus 10. Just for reference, the iPad Air’s 9.7-inch screen boasts a pixel density of 264ppi.

The small fly in the ointment is that the Pro 12.2 uses a PenTile subpixel array which means it’s very bright but sacrifices absolute technical sharpness in the name of intensity. Frankly, the difference between the three devices listed is nigh on imperceptible to the naked eye. 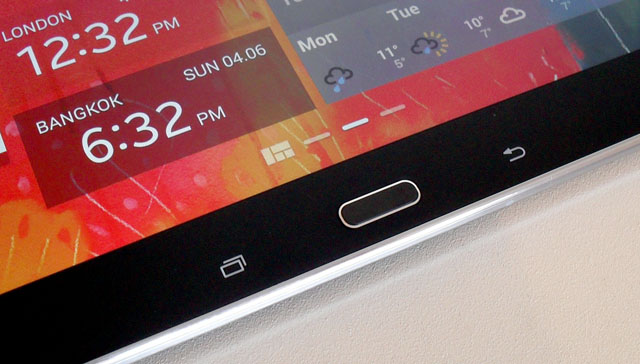 Thankfully, the Pro 12.2’s display is also very colourful and the viewing angles are excellent. You can lay it down flat on a table and easily read the screen no matter what angle you look at it, an essential strength for a big tablet. In fact, the only downside I can find to the Pro 12.2’s display is that its size makes gaming just a wee bit of a challenge. It’s not impossible – I played a good few hours of Dead Trigger 2 on it – but you need to give some thought to how you hold it and where you put your fingers.

Screen aside, the design of the Pro 12.2 is all very Samsung as below it you’ll notice the traditional physical Home button flanked by virtual controls for Back and Recent Apps. The drawback with this arrangement is that the buttons don’t move when the screen rotates to portrait. The plus side is that you don’t sacrifice any display space to on-screen controls. 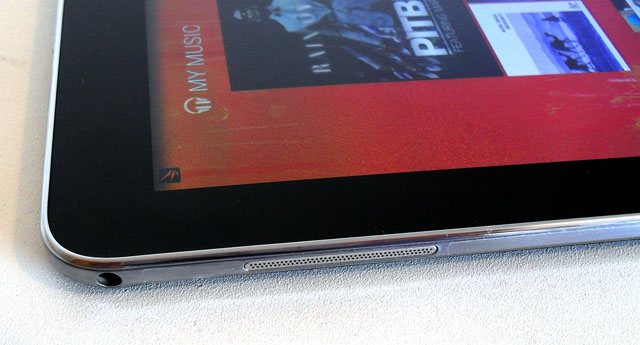 I’ll forgive the Pro 12.2 this rather dated layout more easily than other Galaxy devices because it quite clearly is not a device intended for more than occasional use in portrait.

Elsewhere everything is seems in order. The Pro’s chassis is a very solid affair with not the slightest hint of flex no matter how much twist you apply and the stereo speakers are not only loud and musically competent but are built into the upper third of each edge, in a place your hands don’t end up when you are holding the thing. The chrome band that surrounds the device looks pretty smart while the back is made from faux leather-effect plastic that’s soft and pleasant to the touch. 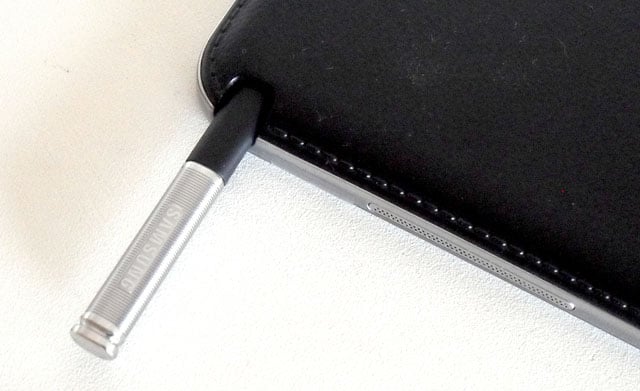 The Galaxy Note S Pen gets tucked away in the body

As for the ports and controls, the micro USB 3.0, S Pen slot and covered MicroSD memory card on the right, with the 3.5mm audio on the left and volume, power and IR transmitter on the top. All in all, thoughtfully placed leaving the bottom edge clear so you can rest the Pro in your lap no matter what you’ve got plugged into it.

Powering the show is Samsung’s own Exynos 5 Octa 5420 chipset, which consists of two chips: one quad-core 1.9 GHz Cortex-A15 and one quad-core 1.3 GHz Cortex-A7 with a Mali-T628 MP6 graphics processor and 3GB of RAM. If you buy a 3G or LTE Pro 12.2 you get a Snapdragon 800 chipset. The idea behind the two-chip rig is that the more powerful one does the heavy lifting while the other less power-hungry chip does the everyday household chores. 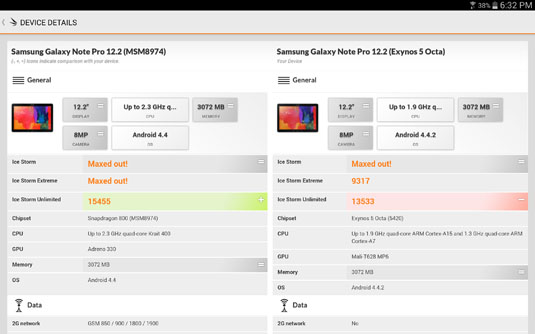 3DMark: Snapdragon vs Exynos Pro 12.2 – click for a larger image

This is called big.LITTLE Processing in ARM speak. The only comparatively weak spot in the chipset is the GPU, which still can’t match the performance of the latest Adreno components. Subjected to Futuremark’s cross-platform 3DMark test, the Exynos Pro 12.2 scored 13,533 compared to 15,544 for the Qualcomm-powered 3G version. Of course in the real world that 2,000-odd difference is bordering on the meaningless.