Updated The internet has been all aflutter after a picture taken by NASA's Curiosity rover appeared to show a beam of light emanating from the Red Planet's horizon. 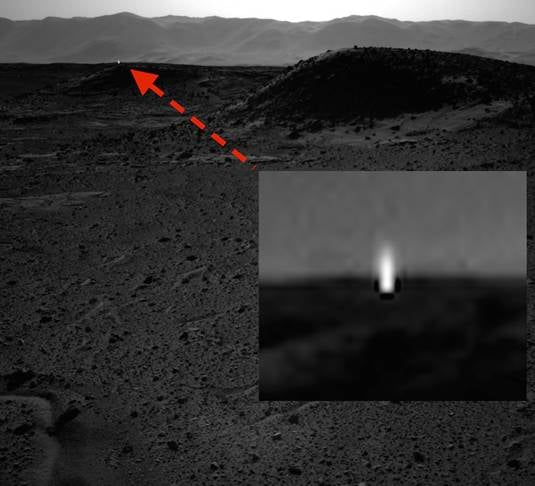 "This is not a glare from the sun, nor is it an artifact of the photo process," claimed the image's discoverer, Scott Waring of UFO Sightings Daily.

"Look closely at the bottom of the light," Waring wrote. "It has a very flat surface giving us 100% indiction [sic] it is from the surface. Sure NASA could go and investigate it, but hey, they are not on Mars to discovery life, but there to stall its discovery."

Doug Ellison from NASA's Jet Propulsion Laboratory, a man who would very much like to find evidence of life on Mars considering what it would do for JPL's budget, has a more likely solution. He tweeted that the image appears to be the result of Curiosity taking a cosmic ray hit, rather than a sign of little green men.

As streams of high energy particles sleet through space, they cause real problems for computer equipment. It's likely that the ray hit Curiosity and killed off a chunk of data in the camera, since the light only appeared from Curiosity's right-hand camera and not the left one, which took a second image of the area at the same time.

No doubt Mr. Waring will cry foul at such an assertion; his website also claims NASA's probes on Mars have found and ignored tiny statues, fossils, and a carved alien skull. Given that the site also claims to have pictures of a large alien ship docked near the ISS, a UFO fleet flying over Alabama, and an alien saving a man from a road accident, we'll take a more skeptical tone. 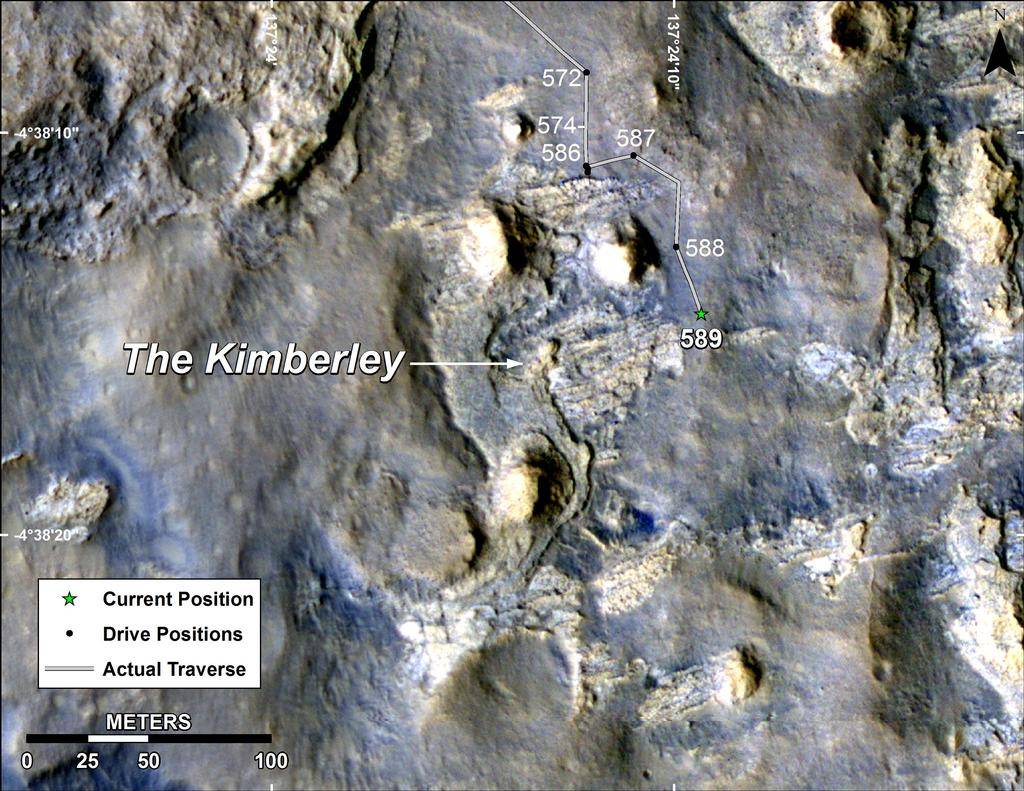 Curiosity has been looking around a lot at the moment, as the rover has just finished an epic trek across the Martian surface. After moving out of what looks like a dried-up lake bed, the rover has been climbing towards an outcropping dubbed "Kimberly" by the JPL team, surmounting sand dunes and occasionally going backwards during its three-month trip.

The rover arrived on April 3 and is scoping out the best place to investigate Kimberly. The rock formation seems to expose several different layers of material, and Curiosity will fire up its drill and digest samples if the early data on its composition is correct.

It's very tempting to mock people like Mr. Waring, but his enthusiasm is also a very positive sign. NASA has been releasing streams of images from the Red Planet for public consumption and doesn't have the time or the resources to go over each one with a microscope, but thankfully there are many people online who are happy to do just that. ®

NASA JPL has told The Register that is has examined the Curiosity images and has isolated the possible cause to a couple of options.

The first is that the light comes from sunlight reflecting off a rock on the Martian surface. A crater on the horizon could have reflected light from the Sun, which was relatively low in the sky when the image was taken.

"The rover science team is also looking at the possibility that the bright spots could be caused by cosmic rays striking the camera's detector," said a spokesman. "Among the thousands of images received from Curiosity, ones with bright spots show up nearly every week."