After 12 years of research and testing, the Swiss engineering team Solar Impulse has unveiled the craft that will take a round-the-world- trip powered solely by photovoltaic power cells. 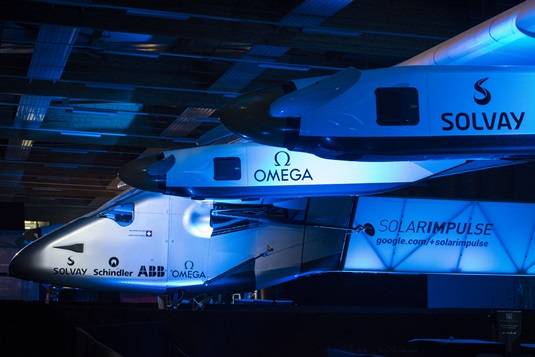 Coming soon to a skyline near you

"A vision counts for nothing unless it is backed up by action," said Bertrand Piccard, founder of Solar Impulse. "With 8 world records for Solar Impulse 1, the first solar aircraft capable of flying during the night, crossing two continents and flying over the United States, we have shown that clean technologies and renewable energies can accomplish the impossible."

The Solar Impulse 2 aircraft has a wingspan of 72 meters (236 feet), slightly larger than a Boeing 747, but weighs just 2,300kg (5,000lb). About a third of that payload is batteries to store the energy harvested by the 17,248 solar cells, each 135 microns thick, spread across its massive wings. The four 17.5hp electric motors that will power the craft's propellers account for much of the rest of Solar Impulse's weight.

All this leaves precious little room for luxuries. The pilot will sit in the single reclinable seat (which doubles as a toilet) in a 3.8 cubic meter cabin that lacks heating or air conditioning, and will experience temperatures ranging from 40°C to -40°C. As the plane is capable of flying indefinitely under its own power, the team said that human frailty is its biggest handicap.

"Solar Impulse 2 will have virtually unlimited autonomy, and now we need to make sure the pilot is as sustainable as his aircraft," said André Borschberg, CEO of the Solar Impulse team. "This is why the round-the-world flight will be as much a human as a technological feat." 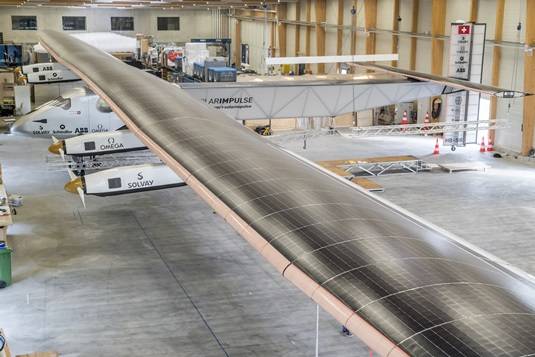 The pilot is this craft's weakest link

It's certainly going to be rough on the pilot. Solar Impulse 2 will have a cruising speed of under 50mph and will spend the daylight hours of its flight ascending to around 8,000 meters above the ground using solar power. At night the aircraft will run on battery power and slowly drift down to around 1,500 meters before climbing again at dawn.

To save weight there's no full autopilot, either. The limited computing power aboard can keep the aircraft flying level in the right direction, but should the plane's attitude shift in-flight, vibrating bracelets on the pilot's wrists will signal an alert to get a human back on the controls.

As such, the aircraft will need to make stops every few days to allow for pilot changeovers. But for the Atlantic and Pacific Ocean crossings, one pilot will have to keep Solar Impulse 2 flying for over a week without respite.

After flight testing in May, the aircraft will undergo final tweaking before setting off in March 2015 from the Middle East and flying to India and then China. After crossing the Pacific – the longest leg of the flight – the aircraft will cross the US and the Atlantic before swooping through Southern Europe back to its starting point.

So what, you might think. Solar Impulse 2 isn’t exactly a commercially viable aircraft, given that its carrying capacity is pitiful and the airframe has a top speed of 86mph under ideal conditions. But the spinoffs generated by the build process could prove very profitable indeed.

The airframe, for example, is made of a new kind of carbon fiber developed by the team that weight just 25 grams per square meter – three times as light as standard printer paper. The solar powered motors are a record-breaking 94 per cent efficient, while the wafer-thin photovoltaic cells convert the Sun's rays with 23 per cent efficiency.

Whether or not the aircraft makes it on its epic trip is, at this point, somewhat immaterial. While a personal triumph for the two pilots, the real benefits of stretching what is possible from an engineering standpoint have already been realized. ®