Windows 8.1 Update: Throws desktop drones a bone but still as TOUCHY as ever

It’s a transitional release, with the destination being a substantial reworking of the original concept.

The problem for Microsoft is that it based Windows 8 around a new touch-friendly app platform but its users largely work in the traditional desktop environment, with many actively resistant to the Start screen which replaced the old Start menu.

The app platform has stuttered as a result, and most businesses still prefer Windows 7 despite underlying improvements in the Windows 8 desktop. Microsoft’s new strategy is to play nice with desktop users, with plans (though not in this update) to restore the Start menu and to have the new-style apps run optionally in a desktop window.

So, where on the great sliding scale between touch and the classic Windows desktop does this latest, free instalment in the Windows 8 saga leave us?

Despite appearances, this is not a retreat but rather a different route to the same goal: establishing Store apps built on the Windows Runtime (WinRT) engine as the primary app platform for Windows. Windows boss Terry Myerson puts it like this:

I showed some early thinking on how the user experience in Windows will evolve in a way that will help developers’ apps make their way to users across devices and form factors. We set out to do this is a thoughtful way – one where we could enable more productivity for customers working in desktop mode, while building smart bridges to the new modern user experience and ensuring customers can get access to all your great apps in the Windows Store.

Why did not Microsoft do it this way first time around? A good question, but be in no doubt: Store apps – and Universal Apps built on the same platform but now working on the forthcoming Windows Phone 8.1 as well as PCs – remain at the heart of Microsoft’s strategy. A touch-friendly version of Office was previewed at the company’s Build developer conference in San Francisco as an example of a Universal App, so something close to full Office is coming to Windows Phone.

The current update is less interesting, but still significant. The changes in the user interface are easy to summarise:

IE 11 is a decent browser though still behind rivals in some areas. The FishGL site developed by Microsoft to show off WebGL support is faster in Google Chrome. The biggest problem with IE 11, though, is that too many websites still have logic that goes: “if IE detected, present quirky version.” IE 11’s compatibility mode is a workaround for those who know, but many will just use another browser and presume that IE is broken.

More interesting are the changes Microsoft has made to the sandboxing of Windows Store apps. There are two ways to install these: one being from the public Store, and the other being private deployments, called sideloading. In earlier releases, sideloading required expensive certificates, or the Enterprise version of Windows 8. Sideloading is now permitted for any domain-joined Windows Professional edition, and if you need sideloading keys, you can purchase an unlimited number for around $100. 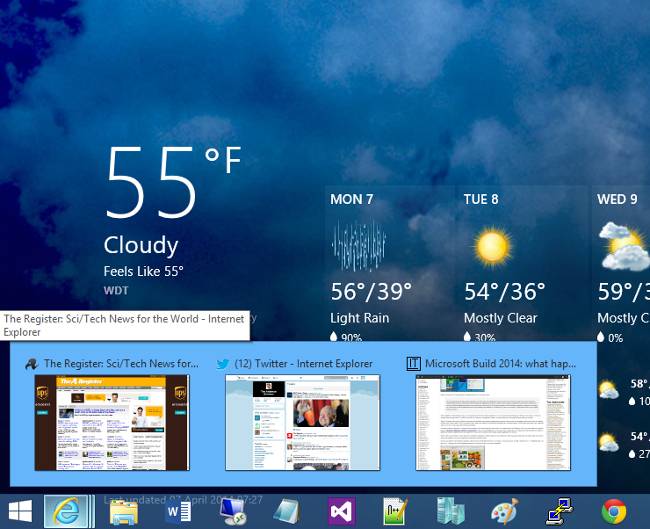 You can now display the taskbar, with desktop app previews, while running Store apps

In addition, sideloaded apps can now escape the WinRT sandbox, using a new thing called Brokered Windows Runtime Components. You can now write desktop libraries that can be called from Store apps, subject to some limitations such as 32-bit only on the desktop side. The desktop component has unrestricted access to the Windows API. This will make it feasible for enterprises to write business Store apps that interact with existing desktop applications or database libraries.

Non-business users should not be at risk because these features do not apply to apps installed from the Store.

What we are seeing is a triple push for WinRT apps. They will work across PC and Phone, business apps can escape the sandbox, and in future they will be able to pose as desktop apps by running in a window.

Given the difficulties Microsoft has had in securing the desktop, and the unsuitability of traditional desktop applications for touch control, the focus on Store apps does make sense, though it will count for nothing if businesses refuse to move away from Windows 7.

The best hope of that, from Microsoft’s point of view, is the forthcoming update with the restored Start menu, not this one. Nevertheless, this release lays the foundations.

“It is surprising how conservative Windows users have turned out to be,” I remarked to one of the Windows executives at Build. “We call it passionate,” was the reply.

That “passion” has obstructed Microsoft’s original conception of Windows 8 and the immersive user interface, which hid important user interface elements so effectively that many users were left behind. Windows 8 is now being reworked to accommodate them, making it less pure than the original, but more likely to win acceptance. ®