We've hit the motherlode: Beige boxen from the '90s

Through another room, and we hit the PC era, with racks of beige boxes along one side, from the first IBM PC through PS/2 and beyond. The range extends at least as far as 2005, when the x86 client business was offloaded to Lenovo. Facing off against them are the vendor’s erstwhile notebook offering, Thinkpads, including keyboard-free touchscreen devices dating back as far as 1993. Like that was ever going to catch on.

The racks of now-obsolete personal computing kit in particular poses hosts of questions. These devices had a fraction of today’s power, but this writer at least remembers how cutting edge and revolutionary they were when they were released – feel the might of the 486 – giving buyers that sliver of competitive edge that justified the thousands of pounds they cost back in the '80s and '90s. How quickly obsolescence comes around.

Food for thought for the site’s latest crop of cutting edge developers surely? Apparently not. Asked if Hursley’s inmates like to take a trip downstairs to gaze at the racks of ATs or ThinkPads or green screen terminals for inspiration, McClean is blunt. “No, I wouldn’t say they do.”

“They’re historical things, right?” he continues. “They’re not going to shed new light on the world or anything else. You can reflect on things – that people made decisions at different points in time. It’s more that you can see those opportunities at different times then.”

It’s a fine balance. Focus remorselessly on the future, and be in danger of forgetting the mistakes of the past? Or continuously fight yesterday’s war, even as others create a new future around you. It’s a dilemma for any technology company. You might have your own view on Big Blue’s history, but it will probably ask you to name any other IT companies that have been around for over 100 years.

As we emerge from the bowels of the oldest part of the house, glimpsing into rooms bursting with un-catalogued or unrestored IBM kit, Muldoon mentions the strong rooms maintained by the various families who owned Hursley. One remains unopened apparently.

From there, it’s back into the 21st century, or as IBM calls it, the Emerging Technology Services Lab. This is where those people with titles like "senior inventor" live, or at least demonstrate their most interesting projects. The day we arrived, demos were heavily focused on the internet of things, including a walk-through on a system for integrating building plans, service requests, sensors, and manuals. This included augmented reality overlays of manuals and repair procedures. The kind of thing you see demonstrated for M in the latest Bond movies? Chances are the plumber at MI6 will be using it first.

Remote healthcare was another hot topic. When the City of Bolzano in Italy decided to pitch itself as a retirement destination, it called in IBMers from Hursley to examine ways of monitoring the oldies without having to provide each with a personal butler. The result is a huge degree of instrumentation, monitoring health as well as more tangible issues, such as utility use, carbon monoxide and the like. The aim is to both maintain a more holistic picture of the residents' health and ensure scarce human resources are targeted more accurately.

Node-RED, another Hursley-developed technology, is a visual development environment to connect devices such as sensors, and link them into other systems – a tool to help "wire" the internet of things. It is based on the MQ technology which underpins more traditional machine-to-machine communications, and which was developed at Hursley.

If you want to get truly bleeding edge, consider the use of brainwaves as computer interface. It was in service of this concept that your reporter found himself with a headset strapped to his bonce and told to empty his mind and then control a remote control car. Years of covering technology meant your reporter emptied his mind so well he forgot to film his subsequent mental driving escapades – although he did manage to get a snap of the onscreen code that represented his virtual brain dump. 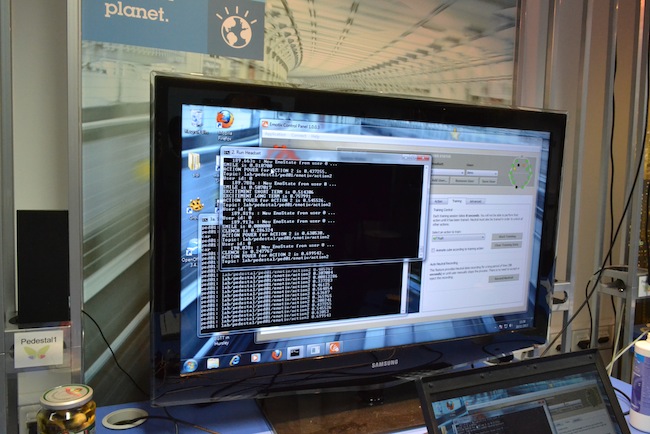 So, Hursley shows us the future of IBM, and technology, as well as the past.

What about the present, which is of course where the bread comes from in the inverted sandwich that is the real world.

You’ll be happy to know that there are real developers working on real present day technology. As we said, Hursley is home to CICS and MQ development as well as a chunky amount of IBM’s Java development. But again, this is an R&D lab, where the real world does overlap with the future. Thus Gerry Reilly, Development Director and CTO, IBM Messaging was happy to wax lyrical about the technology’s leap from its roots buried in pipelines and other difficult-to-reach applications and into our cars and fridges.

MQ’s domain has traditionally been SCADA-type systems, oil pipelines and the like - seriously important, but off the radar of technology’s cool kids and gadget heads, except for the more extreme security nuts. Reilly chuckles as he contemplates how the last few years have seen the same sort of architectures supporting networks of sensors, often from “hobbyists”.

Now, he says, IBM is currently working with serious players in the automotive and white goods sectors, while the principles are being applied in areas such as modelling weather. “A lot of it is being driven by business partners.”

Sadly, he wasn’t able to tell us from which fridge we should be buying if we want to ensure our eating habits are borged into big data analytics systems. IBM has poured cash into acquiring analytics firms over the last six years. It’s almost as if it had taken a long-term view of where technology was going to be heading in the twentyteens and taken a big bet on it.

While Reilly acknowledges that the instrumentation of so much of our every-day life throws up a myriad of cultural, privacy and legal implications, this is for society and business partners to thrash out: “IBM is not going to take a position.” But it will develop and sell you the technology to take your own.

If that gives us plenty to think about as we criss-cross the site, we can distract ourselves by by ruminating on the development of business architecture over the last 40 years. One minute you feel like you’re in a 1970s newly built poly, the next that you’re on the set of The Office. The site really seems to straddle multiple eras – just as the original house does.

Next page: Noses against the glass
Page: