Over half of software developers think they'll be millionaires – study

'New power class' is rising 'from basements into boardrooms'

IT automation-tool supplier Chef has sponsored a study that it says shows software developers are "emerging as a new power class" who believe their jobs are recession-proof, and that money will flow to them like honey.

"Traditionally considered a disenfranchised group that was underappreciated and not well understood in business," the study reports, "this class is now recognized as the source of ideas and innovation."

This "highly influential group" is refashioning enterprises and tugging them into the digital economy, an effort that is "pulling them up from basements and into boardrooms."

And although those developers are crawling out of those dank basements and being blinded by the brilliance of their new-found power, "they’ve refused to let go of their unique collective identity in the process, bringing their fringe culture into the mainstream."

Sound like anyone you know, dear Reg reader? Your own sweet self, maybe? Do you plan to stay at your current job for nine years, as the study says is the average developer's desire? Do you "expect to be a revolutionary influence in major segments of the economy during the next five years," as the survey says 94 per cent of the 1,000 US developers they surveyed see themselves? 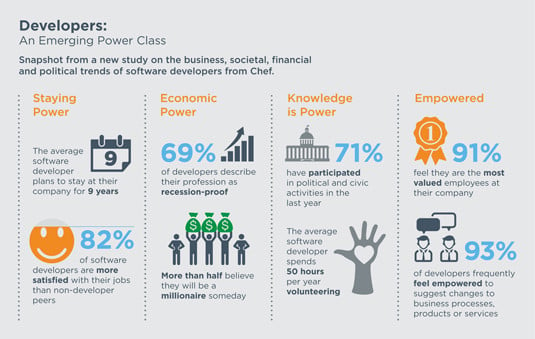 'Powerful, connected influencers who are mobilizing across business and society' (click to enlarge)

Do you see the path ahead paved with gold? The survey says that two-thirds of developers expect to get a raise in the next 12 months – even though 84 per cent think they are already being paid what they are worth – and 56 per cent believe they will eventually become millionaires.

In addition, they feel that the suits who run their firms are shortsighted: 79 per cent believe that management's "pursuit of near-term profits may be holding their companies back from making long-term investments in innovative and unproven solutions."

Listen to your developers, suits. They had plenty of time to meditate on management theory while holed up in Mom's basement. ®