The European Commission has decided Munich, not London, is Europe's top technology hub. The judgement is delivered in a new Atlas of ICT Activity in Europe released this week.

The Atlas rates Europe's “ICT Poles of Excellence”using an “empirical framework” that considers over 40 factors to measure the following:

Once the numbers are totted up the Commission eventually spits out a European ICT Poles of Excellence (EIPE) ranking score between zero and 100. “Poles” that score 81 or more earn tier one status, those between 61 and 80 are tier twos. A score of 41 to 60 lands you in tier three and beneath that you're not excellent enough to count.

“München Kreisfreie Stadt” (more or less the local government area of Munich) scored 100 to take the crown as Europe's most excellent Pole. “London East” was three points behind and Paris was a further two points adrift.

Other British locations to make the cut among the 34 poles identified were:

London East seems to have suffered because there's not much “innovation activity” going on. As the graph below shows, England's capital is tops for business “activity” but a long way behind its Tier 1 rivals on the innovation front. Which looks like ammunition for Silicon Roundabout critics. 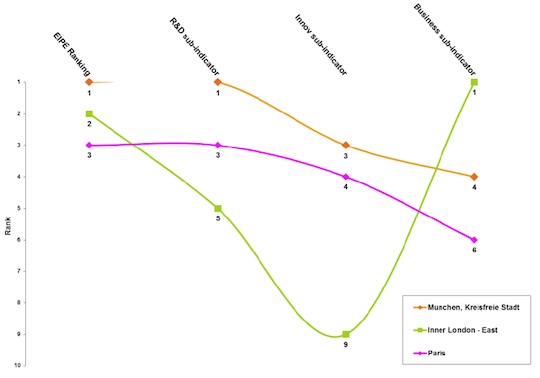 Silicon Roundabout is a good place for business, not so much for innovation

The news isn't all bad for London or Britain, because the Atlas also notes that Poles of Excellence tend to cluster. But Germany is the clear leader in terms of number of Poles within its borders, at 12. ®