Ex–Apple CEO John Sculley, who engineered Steve Jobs' removal from managing the company's Macintosh division in May 1985 – a move that eventually led Jobs to resign that September – now thinks it may not have been such a good idea.

"I think, in hindsight, for the founder to leave was a mistake and I was a part of that," Sculley told The Times of India.

Sculley may have his regrets, but he also had his reasons: Jobs' legendary ... hmmm ... what term should we employ to keep true to the ancient adage, De mortuis nil nisi bonum? How about "mercuriality"?

"Steve in 1985 was not the same as the Steve in 1997," Sculley now says. "By the time he came back, he was a much more matured and experienced executive, while back in the eighties, he was still a young learning executive." 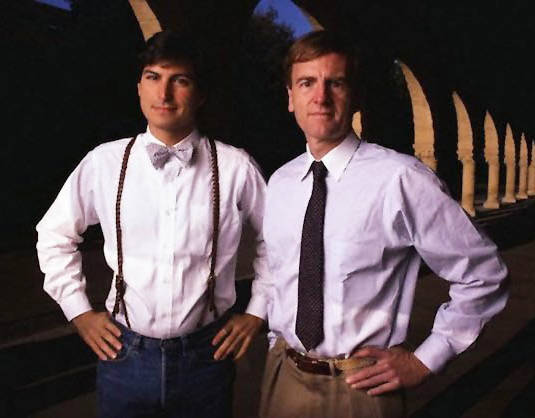 Steve Jobs and John Sculley, at a time when suspenders and a bow tie weren't impossibly outré

Sculley also argues that he was correct in his decision at the time to not lower the Mac's starting price of $2,495, and subsidize it by digging into the profits being earned by Apple's then-flagship product, the Apple II. [Or Apple ][, according to some purists—Ed.]

"That was all the profit of the company," he told the Times. "I never thought there was merit in lowering the price of the Macintosh. I never regretted that decision."

Hindsight being 20/20, Sculley now thinks that there could have been a way to work out his differences with Jobs – perhaps through negotiation, perhaps through more involvement by the Apple's board of directors, perhaps through a personality transplant for the mercurial Jobs.