Opportunity selfie: Martian winds have given the spunky ol' rover a spring cleaning

The winds on Mars have been scouring the surface of the Opportunity rover, and NASA says the plucky little robot is now cleaner than it has been in nearly a decade.

Back in January, Opportunity took a selfie using its panoramic camera, which showed that the rover was getting rather dusty. This is a bit of a problem, since Opportunity relies on solar panels for power, and NASA said the panels were only operating at about 60 per cent efficiency.

The rover has spent the Martian winter resting up and charging its lithium ion batteries, and during that sojourn things have been a tad windy in its locale; on Thursday NASA released a recent selfie taken by the rover showing it looking very clean indeed.

"In its sixth Martian winter, NASA's Mars Exploration Rover Opportunity now has cleaner solar arrays than in any Martian winter since its first on the Red Planet, in 2005," the agency said. "Cleaning effects of wind events in March boosted the amount of electricity available for the rover's work."

The windy cleaning has been so effective that power generation has been boosted by more than 70 percent compared with two months ago, to more than 615 watt hours. The rover needs about 100W of solar power to function, so the clean means it's good to go for a long time yet. 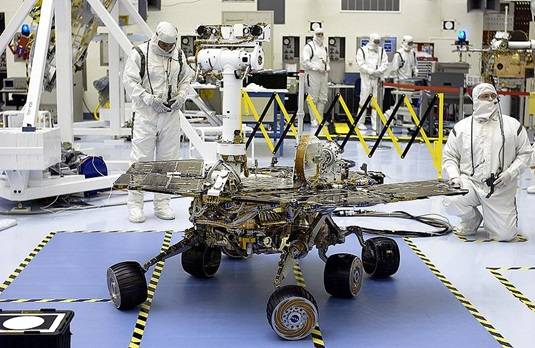 Opportunity at its cleanest

It has been over a decade since Opportunity, and its sadly defunct twin Spirit, bounced down onto the Martian surface. Initially, NASA estimated that they would only last 90 days, an assumption made because the agency thought their solar panels would get covered in dust, as had been the case with the Sojourner rover that landed on Mars in 1997.

But Opportunity is a much larger vehicle than the tiny Sojourner, and its solar panels are relatively high up. The winds of Mars have proven quite effective at keeping the solar panels clean, which has contributed greatly to its extraordinary longevity.

With Martian days now getting longer in Opportunity's time zone, the rover is being sent up a nearby hillside dubbed Cape Tribulation to check out rock formations at the top which may hold some clues to Mars' watery past. The trip should take about two years, or longer if it finds any more Martian doughnuts along the way. ®