On April 21st, 1989, Nintendo introduced a handheld system which would go on to become the best selling games system of the 20th century. The original Game Boy made its debut in Japan on that day, and for the next decade the chunky off-white handheld would become an essential accessory to a generation of gamers.

Many of us who grew up in the heyday of the Game Boy have many a fond memory of passing road trips, doctor-visit waits, and hours of "homework" mashing buttons and staring into the 2.5-nch, 160x144 "creamed spinach" monochrome display.

Debuting in between the releases of the Nintendo Entertainment System (NES) and the Super Nintendo (SNES), the Game Boy was developed as a handheld component that offered slimmed-down or adapted 8-bit versions of titles that would appear on the larger home consoles.

Handheld gaming systems had existed for more than a decade before the Gameboy was released, though these devices were often extremely simple and limited in terms of gameplay. Nintendo itself had released a handheld console called the Game & Watch back in 1980, with development headed up by eventual Game Boy boss Gunpei Yokoi.

The Game Boy, however, introduced to the world a number of concepts that now form the basis of mobile gaming. The handset was affordable and the games themselves were fun to play, offering a wide catalog and deep experience. The Game Boy surpassed the novelty of just being a portable device and was embraced as a full gaming system. 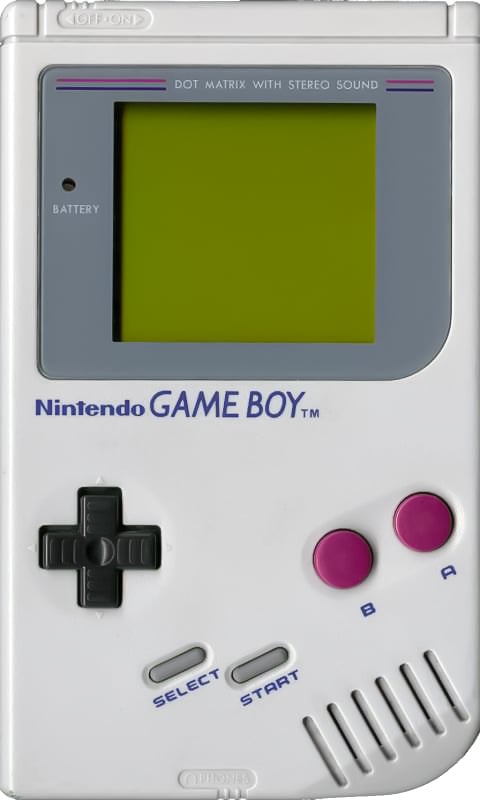 Under the hood, the Game Boy was underpowered even by the standards of the day. The aforementioned 2.5-inch monochrome screen was powered by a 4.19MHz Sharp processor designed with elements of both the 8080 and Z80 chips. (Which architecture is closer remains a matter of debate.) The system contained 8KB each of RAM and video memory.

Technically, the Game Boy was severely outclassed by competing handheld consoles of the day. Sega's GameGear and Atari's Lynx consoles both offered superior color screens on their consoles, but neither managed to keep pace, thanks to a strategy that Nintendo continues to benefit from today.

The Game Boy made up for its technical limitations, in large part with its games. From its launch, the Game Boy sported "killer app" titles such as Tetris, Legend of Zelda: Link's Awakening, and in its later years Pokemon –which, even on limited hardware, bordered on being addictive to play.

The original Game Boy would be phased out by the late '90s as the smaller Game Boy Pocket and more powerful Game Boy Advance were introduced. The brand carried over into the 21st century before eventually being replaced by the DS family of handhelds.

A quarter-century after its release, the Game Boy lives on as one of the most influential gaming devices, handheld or otherwise, of all time. ®