'Most reliable hardware on the planet' ... is not a BlackBerry lookalike mobe

HDS has updated its 2010 vintage high-end VSP array with the VSP G1000 and a new operating system, together providing the "highest performance and most available unified storage system in the industry," and claiming it's "the most reliable hardware on the planet."

The DS8000 line was boosted with the DS8870 product in October 2012 which featured with POWER7 controllers delivering three times more performance than the then current DS8800.

At an event in Amsterdam today HDS announced the VSP G1000 and new operating software under a Continuous Cloud infrastructure rubric.

A CCI, that's private cloud we understand, rich in marketing yadda-yadda, seems to be "Business Defined IT", and is always available, automated and agile. Suppliers love the word "agile" because it sounds modern and great but doesn't commit them to anything in particular. We think it means that SVOS systems can be upgraded and modified non-disruptively, with a data-in-place process, and they are available all or most of the time.

HDS says this is "the most reliable hardware on the planet," and the "highest performance and most available unified storage system in the industry," which are pretty strong claims. It has a 100 per cent data availability guarantee. Non-disruptive microcode upgrades are completed without affecting application quality of service.

Performance-wise it is claimed to provide a threefold increase over the VSP, as well as being more power-efficient.

It is, HDS says, "a single platform for all data," block, file and object, and a scalable and powerful one, offering:

There can be from two to 16 Virtual Storage Directors (VSDs) or controllers, twice as many as the VSP. These share a global cache.

The system controllers can be up to 100 metres apart.

The system controller (VSD) processor blades use Intel Xeon Quad-Core 2.33GH processors. Each Host Adapter and disk adapter in the VSP G1000 is equipped with a Hitachi data acceleration ASIC.

External storage can be virtualised by the G1000:

That is quite a list, and it's not exhaustive.

The Storage Virtualisation Operating System (SVOS) is the sixth generation of HDS' enterprise storage array operating software and runs on the G1000. It is described as standalone storage virtualisation software, which implies it can be bought or run independent of HDS hardware.

HDS also says it is the foundation for global storage virtualisation, and claims it will:

A slide said it would be the "common OS across Hitachi storage for the future". Supporting text said it will power "core infrastructure storage platforms that come in the future; some that look quite different from the VSP G1000."

This latter item provides "multi-system and multi-datacenter active-active capabilities without the need for an appliance." Generally, HDS says, an appliance like EMC's VPLEX is needed to provide failover between high-end enterprise systems in a data centre and between data centres.

NetApp with its clustered ONTAP systems would disagree.

SVOS is claimed to have a leadership NDM capability.

The G1000 has had a considerable performance boost over the VSP array, having: 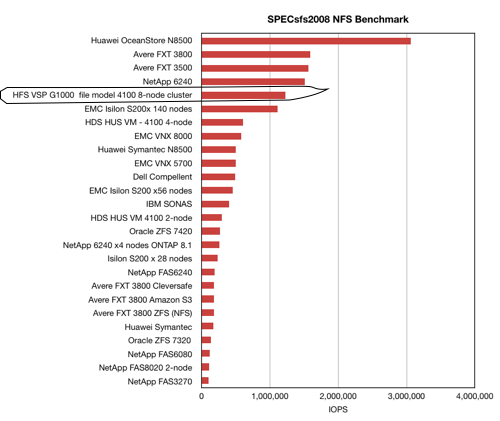 It also has a 1.2 million SPEC.org NFS result, along with encryption support for all media types. Active/active, clustered systems can be over 100KM apart.

G!000s can start as a virtualisation controller with no capacity, and grow to be a unified storage system with an 8-node Hitachi NAS platform (HNAS).

The G1000 can also be used as the storage vault for a Hitachi Content Platform (HCP), which provides object storage.

In May three years ago, HDS said it wanted to move to having a single storage system covering both enterprise and mid-range storage needs. The SVOS VSP G1000 looks like the first such system, and it has taken a while to get there. We think that this means, possibly, the HUS line will may get SVOS support too, with SVOS being the single platform.

SVOS and the G1000 are certified for Microsoft Private Cloud Deployments and SAP's HANA Tailored Database Initiative – and its integration with the VMware ecosystem is said to be extended.

There are new entry-level UCP (Unified Compute Platform) configurations for VMware's vSphere, and the UCP supports the G1000. There is a UCP for VMware with Cisco UCS server, G1000 array and SVOS software coming soon.

Hitachi's Command Suite v8.0 has had SVOS support added and has a REST API plus the general UI has been streamlined.

It can manage SVOS capabilities such as Virtual Storage Machines, Global Active Devices and NDM Workflow (2014). There is application service level management for performance and capacity.

*If you think you've come across a Hitachi G1000 system before, you're right. In 2003, Hitachi released its G1000 mobile phone, which looked a lot like a BlackBerry because of its keyboard: 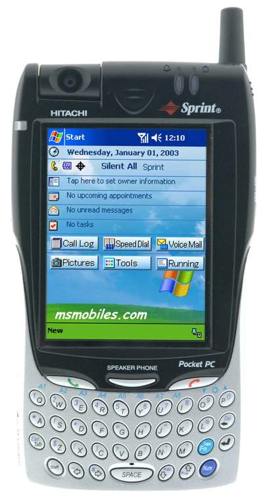