Microsoft and Equinix have interlaced their fleet of data centers to let customers go directly to the Azure cloud from inside 16 co-location data centers around the world.

The expansion to 'Azure ExpressRoute' was announced by Microsoft on Tuesday and means security-conscious organizations hosting with Equinix can safely connect to Azure without having to go over a public network and acquire greater and more reliable bandwidth for shuffling files between services. It will not, however, protect them from the security hazards of public cloud computing, but we're sure Reg readers know that already.

"ExpressRoute is currently available to select customers as a "public preview" at Equinix IBX data centers in Silicon Valley and Washington, DC with general availability expected later this spring," Microsoft wrote in a blog post announcing the move. "The service will then be rolled out in multiple metro areas in Europe, Asia-Pacific and South America throughout 2014, which will ultimately allow enterprises to quickly deploy hybrid environments in new markets".

ExpressRoute launched in October 2013 as Microsoft's answer to Amazon's DirectConnect.

The tech lets companies tap into Azure either via plopping some servers inside an Equinix data center and using the co-location company's switching fabric to get a direct connection to edge Azure servers, or connect their own data centers to Azure via an MPLS VPN from AT&T. Microsoft also recently announced the rollout of the tech in two BT data centers to give similar colo-to-cloud access from Amsterdam and Dublin. 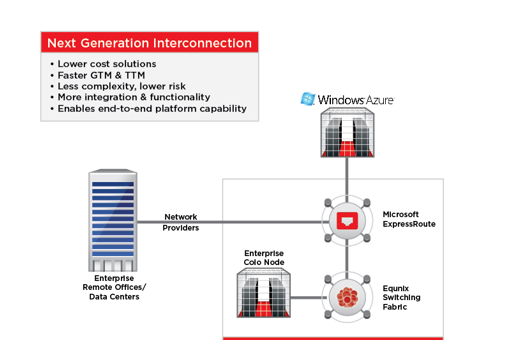 This is part of Redmond's new Azure strategy which sees the company try to blur the distinction between locally hosted and remotely hosted compute and storage assets.

By using Equinix facilities Microsoft is able to tap into a company that offers access to over 900 separate networks. "Equinix boasts the largest number of networks under one roof of any data center provider," Equinix claims.

Cloud rival Google, meanwhile, is yet to offer any equivalent service. ®