Enterprise storage will die just like tape did, say chaps with graphs

The Wikibon biz tech consultancy thinks that the era of networked filers and SANs is going to end with server SANs replacing them. SANs and filers will have largely died away by 2027, it reckons.

The chart below shows the results from Wikibon's Server SAN Research Project 2014.

Between 2012 and 2014 the storage market will have a lowish compound annual growth rate (CAGR) of 3.9 per cent. That will be the result of the CAGR numbers of three storage market components: 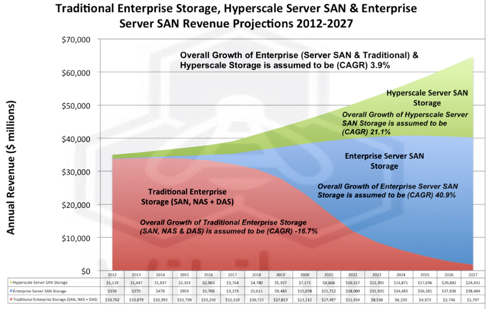 Wikibon Enterprise storage forecast chart. Click to embiggen and then study in amazement.

This is a devastating and dramatic view of the enterprise storage market which is dominated by network storage arrays, both filers and SANs, and by individual servers with their own DAS. In effect, enterprise storage as we know it is forecast to go the way of tape, with the decline starting to become evident from now.

The hyperscale users are Amazon, Facebook, Google, Microsoft (Azure), Yahoo and the like, who have developed their own infrastructure to suit their business needs.

Wikibon thinks this server SAN and hyperscale storage rise is happening because SANs and NFS don't serve modern, virtualized, multi-core, multi-socket servers fast enough. In the eighties and early nineties servers were not virtualised and started out being single socket and single core, and so not making much demand on networked storage, which provided better storage utilisation than DAS.

Centralizing storage onto storage arrays attached to multiple servers created significant improvements in storage utilisation. Moving applications to different servers is much easier - seconds/minutes vs. hours or days. Over time, functionality previously in the server migrated out to the storage array, e.g., synchronous and asynchronous replication. Switched network capabilities improved, and a complete ecosystem was born around the storage array.

However, networked storage has become less suitable. Storage and data management software tends to lock in customers to a particular supplier. Virtualized, multi-core and multi-socket servers, particularly with flash storage, can suck in and process data faster than SANs and filers can serve it up. Wikibon's researcher David Floyer says:

Virtualization and flash technologies have also highlighted the disadvantages of the fibre networked storage model. When IO latency is measured in tens of milliseconds, and the number of IOs to a disk drive is limited to 100 IOs/second, the overheads of a fibre network are not important. As flash allows orders of magnitude more IO, and potential IO latencies are reduced by 1,000 times, the protocol overheads of IO and fibre networks become a bottleneck for new applications. The management of storage in storage arrays is complex to set up and monitor, and even the language of storage (LUNs, ports, RAID, etc.) has resisted simplification.

HP more or less started the mainstream use of this with its acquisition of the Lefthand (P4000 and now StoreVirtual) virtual storage appliance (VSA). The latest populariser is VMware with its VSAN product.

Server SANs can feed data to modern servers and their apps faster than networked storage. Also, Wikibon states: "Server SAN has a large number of potential benefits to application design, application operation, application performance and infrastructure cost. These come from an increased flexibility in how a storage is mapped to the applications."

Interestingly Wikibon does not list Fusion-io here, nor Violin Memory which, with its SQL Server 2014 WFA product would seem to be well-placed in the Windows side of things.

Server SANS are the best example, in the storage Vulture's view, of software-defined storage and will come to exemplify that nebulous concept.

Beneficiaries of server SANs will include storage component suppliers:

Where does this leave the mainstream networked storage suppliers? If, and that's a significant "if", Wikibon's Server SAN forecast comes to fruition, then the existing networked storage businesses of Dell, EMC, HDS, HP, IBM and NetApp, along with Coraid, Fujitsu, Imation's Nexsan, X-IO and other suppliers, will face devastation by 2027. This includes networked all-flash array suppliers, like Cisco/Whiptail, Nimbus, Pure Storage, and Skyera, unless they change their strategies for server SANS or the cloud; Solidfire is already there.

EMC has a good starting point with ScaleIO. HP could carry on dominating the Server SAN Market with StoreVirtual. Both suppliers have to find their way through the obstacle of their existing array businesses. Dell has its Fluid Cache for SAN which might become Fluid Cache SAN. The others pretty much have nothing. Expect the valuations of DataCore, Maxta, Nutanix, Pivot3, Sanbolic, ScaleIO and Simplivity to rise as their value as acquisition targets becomes clearer.

The Wikibon report It might just turn out to be one of the most significant storage market analysi reports of the decade. ®