An application posted Thursday by the US Patent and Trademark Office (USPTO) details a display system which would use projection hardware and parabolic lenses to create 3D interfaces.

The filing suggests that the handset described would be able to not only project the 3D images but also monitor and track user movements within the projected image, effectively allowing for a 3D user interface.

Apple engineers Chrisoph Kraj and Marduke Yousefpor describe the system in their application as follows:

Of course, the standard disclaimers on patent filings apply here; Apple has made no mention of any plans to develop or implement a 3D display in the iPhone or iPad and such a system would likely be years away from reaching the prototype phase, let alone reach consumers as a finalized retail product. 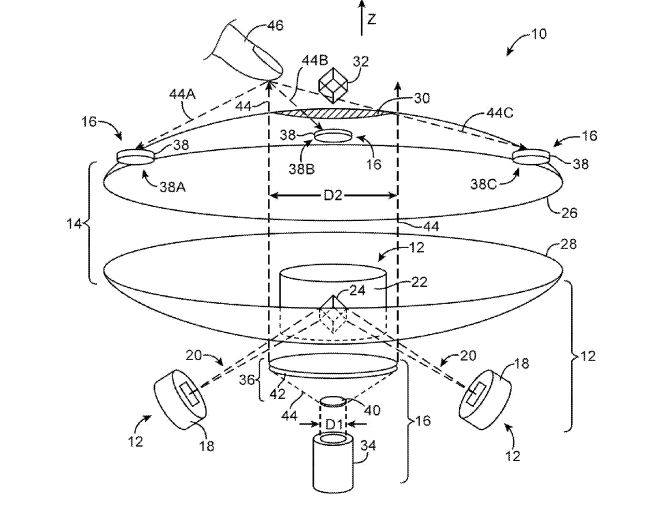 A diagram for the holographic interface.

With recent advancements in both curved-glass hardware and holographic projection technology, however, the stage could be set for more development to take place around 3D interfaces. Apple's recent application for a 3D mounted headset also suggests that the company has been at least dipping its toes in the arenas of virtual reality and 3D user interfaces.

It would be intriguing to see what Apple's design team could do with a 3D interface. Jon Ive and company would no doubt love to have such a canvas on which to expand the visuals for iOS now he's in charge. Hopefully this is one filing which will in fact see the light of day. ®