It's here, the 4TB FLASH drive: SanDisk rips sheet from the Optimus MAX

The 4TB Optimus MAX – which sounds like the big bad brother of an Optimus Prime toy – follows the 2TB Optimus Eco, a technology SanDisk acquired when it bought SMART Storage.

The new SSD can take three full drive writes a day for five years. It has a SAS interface and its basic performance numbers are as follows (with previous Eco numbers in brackets for comparison):

Why is the MAX slower than the Eco? SanDisk says the Eco uses 19nm MLC flash while the MAX is made from 19nm eMLC, a better grade of flash but not one that we usually think of as slower – the MAX random write speed being a third of the Eco's.

The rest of the Optimus line

The Optimus family has new and refreshed members, all using 19nm eMLC NAND, and a quick look at the full-disk writes per day (FDWD) numbers will help to position them:

The performance numbers are:

The new Optimus Eco is slower than the older Eco; possibly due to some kind of market segment optimisation.

We have a naming problem as Extreme, MAX and Ultra all pretty much mean top-of-the-range, but no matter. There's also a fair amount of apparent overlap with SanDisk's pre-SMART acquisition Lightning brand SSDs, as we shall see.

SanDisk reckons SSD capacities will outpace 2.5-inch hard disk capacities. It has a timeline-free chart showing 0.9TB 2.5" disks being contemporaneous with its 4TB Optimus MAX. When 1.2TB HDDS are available, its SSDs will have reached 8TB capacity and be at 16TB when HDD reach 1.6TB, we're told. 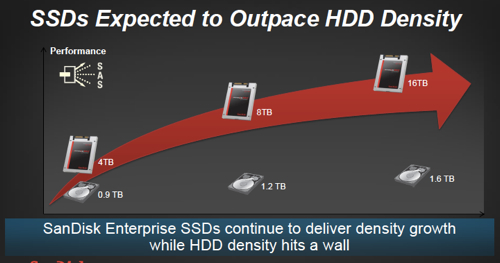 This takes a poor view of 2.5-inch HDD developments and its fab foundry partner Toshiba, which makes HDDs, could set it right. It has more than one 1TB drive. Seagate has a 2TB SpinPoint available now, and coming HAMR technology should take that to 4TB, 8TB and possibly beyond. HGST has a 1.5TB TravelStar drive available now and its Helium-filled enclosure technology, as well as HAMR, should enable it to match and maybe beat Seagate's 2.5-inch drive capacity roadmap.

SanDisk might just be comparing SSDs with performance 15,000RPM 2.5-inch disk drives, which have lower capacities but its chart doesn't say so. Our view is that SanDisk may be right in its assertion of SSD capacity outstripping 2.5-inch disk capacity, thanks to the capacity jump coming from 3D NAND, but it will take a while longer than the slide implies

Also announced today: SanDisk's second-generation Lightning data centre SSDs, which move from 34nm flash to 19nm and from a 6Gbit/s SAS interface to a 12-gig one. The fastest, the Lightning Ultra with its fast SLC flash, can do 25 FDWD for five years, which is probably some kind of record:

We wouldn't be surprised if the Lightning and Optimus lines merged, although SanDisk may see utility in having separately branded 6-gig and 12-gig SAS products.

These Lightnings can fly:

SanDisk believes, and quotes Gartner to support its view, that by the end of 2015 storage and server SSDs will cost less than $1/GB because of 1Z (15nm) NAND cost-efficiencies. This will put them in the same cost ball-park as business-critical and mission-critical disk drives by 2017. By then SanDisk will be using its 3D NAND-like BICS technology and providing a jump in capacity and hence a lower $/GB number

We don't have pricing or availability information for these new Optimus and Lightning SSDs yet. ®

Annexed Donetsk? No more consultants for you then
On-Prem4 Oct 2022 | 6

They’re on track for a whopping three percent in 2026 – well out of the mainstream, but growing faster
Personal Tech4 Oct 2022 | 9