Neural simulation might just be the future of fast, green computing 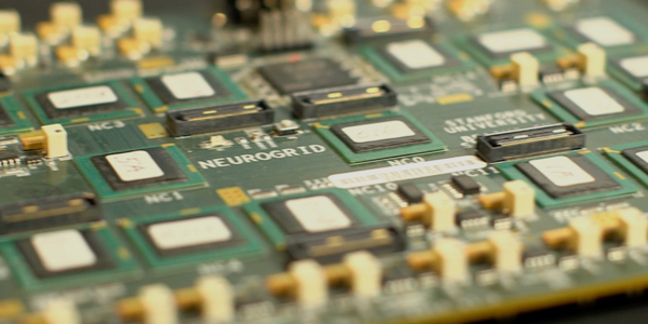 A top-notch supercomputer can beat humans at many things, but they're also energy hogs – which is one reason so much work goes into neural simulation as the basis for computers. Now, Stanford scientists have demonstrated a neural simulation which they say has a million neurons, multi-billion synapse connections – and runs on just three watts.

The not-for-the-cheapskate $US40,000 prototype Neurogrid board created by a group led by bioengineering professor Kwabena Boahen isn't yet ready to take on IBM's Watson over a chess-board. For starters, he says, “you have to know how the brain works to program one of these”.

In the longer term, the aim is to create a suitable compiler, so people accustomed to programming in more conventional languages can write to the Neurogrid board.

The other big ambition of the project is to get the price down. In the university's announcement, Boahen says he believes switching from the 15-year-old fabrication technologies used in his research to modern silicon should yield a hundredfold efficiency improvement – meaning that Neurogrid could be built at a much more reasonable $US400.

The Neurogrid board is based on 16 chips, dubbed Neurocore, each of which has 65,536 neurons. The sharing of electrical circuits on the Neurocore is what creates the billions of synaptic connections.

The kind of applications Boahen imagines for his research include controlling humanoid robots, down to controlling prosthetic limbs. As a prosthetic controller, he says, he hopes that a neural chip could provide fast responses without being tied to an external power source.

The work has been published by the IEEE, abstract here. ®