Small, widely-dispersed botnets ought to do the trick 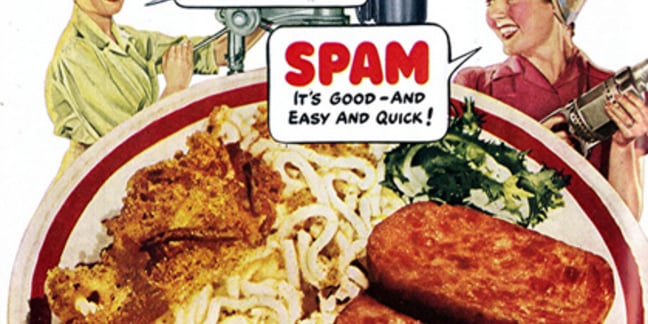 Ignoring the manual and keeping your 'bot nimble are some of the tips a quartet of security researchers have recommended to help spam reach inboxes more effectively.

The recommendations were some of the findings in studies by a research group into the relationships between email harvesters, botmasters and spammers and the secrets of a successful spam campaign.

According to PhD researcher and Yahoo! contractor Gianluca Stringhini, spammers in the cybercrime market bought email lists and bot services from vendors who in turn provided manuals of how to use their wares to bomb inboxes more effectively.

But research by Stringhini and others found that spammers could significantly improve their campaigns by largely ignoring the manuals' recommendations and instead using a series of mathematical models they published.

The extensive mathematical model found in the manual for the infamous Cutwail botnet was flawed, the academics found, and may have been proposed to prop up the technical chops of the writer for 'marketing' purposes.

An alternative model was offered in the paper Stringhini co-authored with other University of California researchers, suggesting spammers tinker with the number of bots online (between 2000 to 3000 at once), the network's uptime and the total emails targeted.

The ne'er-do-wells should also ignore location when buying bots as researchers found inflated market prices did not correlate with better performance.

The research was not merely a guide to building better spambots.

Stringhini said the spamming triangle of turpitude was glued together with 'customer loyalty', a weakness that could be targeted by white hats in order to disrupt spamming ops.

"This customer loyalty can be leveraged for mitigation: by targeting a botnet - for example with a takedown, seizing their command and control servers - researchers would hit the spammer too who would have to find another botmaster and establish a new trust relationship from scratch," Stringhini told Vulture South.

"[Moreover] since spammers stick to a single email lists, it would be possible to track them even after they switch to another botnet by looking at the addresses that they target."

Earlier work by the researchers revealed methods for locating spambots and included a tool dubbed BotMagnifier which could track and analyse the menace.

Improved understanding of the spam ecosystem he said would allows weak points in the spam pipeline to be discovered and better mitigated.

"I hope that other researchers will take the insights provided in our paper and develop tools to win the battle against spamming botnets."

These are not the criminal geniuses you were expecting