Report: Climate change has already hit USA - and time is RUNNING OUT

The US government–mandated Global Change Research Program (USGCRP) has released a mammoth 841-page report on the impact of climate change on the US, region by region, focusing on its effects on water, human health, agriculture, urban life, and more.

The bottom line: climate disruption – their term – caused by human activities is already having an overall negative effect on the nation, but although "historically successful strategies for managing climate-sensitive resources and infrastructure will become less effective over time," there are still measures that can be taken today.

As is true of most climate scientists, the "team of over 300 experts" who contributed to the National Climate Assessment have no doubt about which side they support in the ongoing climate clash.

"Long-term, independent records from weather stations, satellites, ocean buoys, tide gauges, and many other data sources all confirm that our nation, like the rest of the world, is warming," they write. "Many lines of independent evidence demonstrate that the rapid warming of the past half-century is due primarily to human activities." 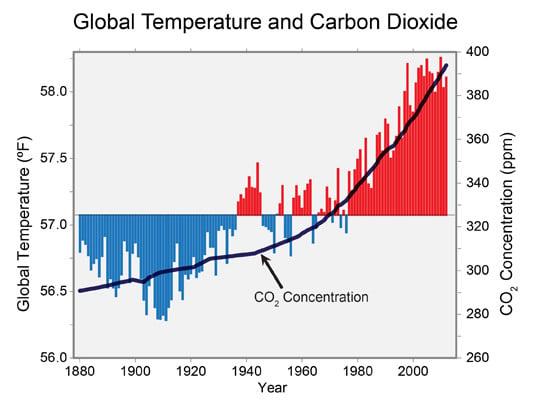 Correlation may not be causation, but when the physics of radiative forcing are taken into account...
(datasets from the NCDC Global Surface Temperature Anomalies and the
Earth Policy Institute Atmospheric Carbon Dioxide Concentration)

The National Climate Assessment assesses that climate disruption is not merely something that will affect future generation: it's happening now. The authors argue that some types of extreme weather events are increasing in number and becoming more intense, sea levels have been detected to be rising, and oceans are becoming more acidic.

"These and other aspects of climate change are disrupting people's lives and damaging some sectors of our economy," the authors write. Dividing the US into eight different regions, they point out the following challenges – and, in a few cases, opportunities – caused or exacerbated by climate change:

In a nutshell, if you don't mind the heat, droughts, and flood, the agricultural and shipping economies will be looking good in the Midwest, but in all other regions of the US, climate disruption is going to be, well, disruptive.

Then again, all will not be beer and skittles in the Midwest, either. As the report points out, "longer growing seasons ... can increase pollen production, intensifying and lengthening the allergy season." Can't win for losing, eh?

"As the impacts of climate change are becoming more prevalent, Americans face choices," the authors write, displaying a tremendous grasp of the obvious. Although there are already enough greenhouse gasses in the atmosphere and heat absorbed by the oceans to ensure that human-caused climate change will continue into the future, there are still matters that need to be dealt with.

Exactly how much warming will increase is a matter to be estimated by climate simulations, which the report contends have improved due to higher resolution and by "considering more options for future human behavior." Results from 30 different models have been combined into the latest übermodel, the Coupled Model Intercomparison Project, 5th Phase (CMIP5). 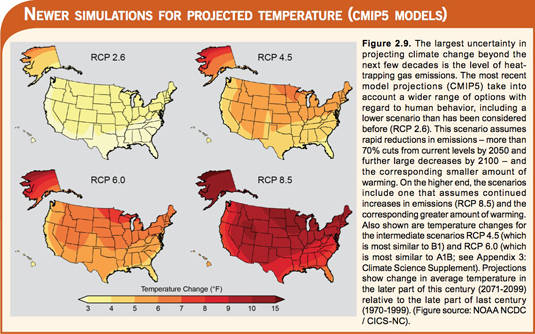 Depending upon which CO2-concentration RCP (Representative Concentration Pathway)
you choose as a future-emissions scenario, the US is about to get
either a wee bit warmer or hotter than Hades (click to enlarge)

The report's authors don't focus only on gloom and doom, however; there are also chapters on mitigation – how to slow global temperature increases – and adaptation – how to deal with the effects of climate disruption. The bad news is that there's a lot to be done, and although "substantial" planning is underway, "few measures have been implemented and those that have appear to be incremental changes."

The good news is that "Climate change adaptation actions often fulfill other societal goals, such as sustainable development, disaster risk reduction, or improvements in quality of life."

To be sure, both mitigation and adaptation would be mammoth undertakings, requiring societal buy-in and political will that are currently lacking. But if and when global leadership accepts the reality of climate change, history has shown that populations can unite to move quickly and decisively to stave off an existential threat – remember World War II?

Or maybe not. The National Climate Assessment was – of course – not welcomed by all parties to the climate change wrangle. The libertarian Cato Institute, for example, blogged that "The report overly focuses on the supposed negative impacts from climate change while largely dismissing or ignoring the positives from climate change," and US Senator James Mountain "Jim" Inhofe (R-OK), author of The Greatest Hoax: How the Global Warming Conspiracy Threatens Your Future, issued a press release deriding the report as a political stunt based on "global warming alarmism."

Despite the conclusion of the 259 climate scientists who authored the Intergovernmental Panel on Climate Change's recent Fifth Assessment Report: The Physical Science Basis that "the science now shows with 95 percent certainty that human activity is the dominant cause of observed warming since the mid-20th century," as well as the assessments of the 300 who worked on Monday's report, Inhofe argues that "We can all agree that natural variations in the climate are taking place, but man-made global warming still remains a theory."

You can offer your own well-reasoned opinions in Comments, but first download any or all of the hefty, chart-and-data-stuffed National Climate Assessment, including the 140-page Highlights and a 20-page Overview, here. ®