Vehicle-to-X is next big digital gold rush – plus security and privacy, of course

Wearable devices are great examples of accessible stuff within the Internet of Things, but on the whole they’re pretty dumb sensors.

Typically, they use Bluetooth to crank out information to a mobile or similar gadget, which relays the data for processing in the cloud and then back to a web interface. Wearables are clever, but soon act dumb when the supporting connectivity disappears.

At the Future World Symposium in London last week, high on the agenda was the notion of Connected Intelligence, which goes beyond simply sensing, connecting and reporting. The general consensus at the event was that for Internet of Things (IoT) to really make an impression on the way we live, these devices need to be able to process data independently and be more than a remote sensor, but an Intelligent Node.

The story so far: typical scenarios for the Internet of Things – click for a larger image

In his talk on Connected Intelligence, Bringing the IoT to Life, Steve Wainwright, chipmaker Freescale veep and general manager of EMEA, outlined the challenges. He spoke not only of his company’s plans in the automotive industry but for the growth and potential for semiconductor manufacturers gearing up for the Internet of Things.

"If you think about home automation, a lot of those individual applications have been around for years and if you’ve been selling micro-controllers for years, you know many of them very well," he said.

"You know about the security side, you know even about the smart energy side. All of a sudden the connectivity dimension of that changes it so dramatically and brand new industries get born as a result.

"At Freescale, networking is a long legacy application that we’ve understood very well, so this gives us some fairly unique features in terms of breadth in this space. For us connected intelligence talks about the technology that’s really enabling the IoT. It’s the sensing, it’s the connectivity, it’s the embedding processing.

"So if the Internet of Things is the conceptual model, the connected intelligence is really the model that enables it, hopefully, seamlessly and scalably. The other thing you get into with these three blocks of sensing, connectivity and embedded processing is really this opportunity to develop the Intelligent Node.” 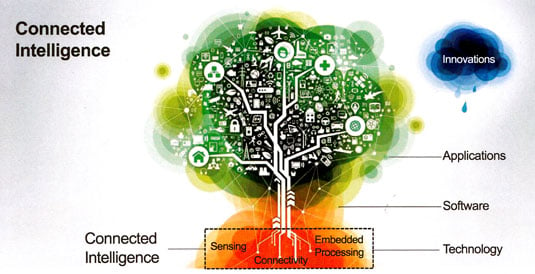 Connected Intelligence: going beyond sensing to decision making within the device

Although Wainwright recognises that Big Data has an important part to play in the Internet of Things, his focus is on the device itself. As an Intelligent Node it should be capable of managing the processing and working out whether or not to transmit that data anywhere else. To localise the processing has a number of advantages, one of which is perhaps all too easily taken for granted – the networking itself.

"One of the real dangers of this is how on Earth do we manage these networks?" asked Wainwright.

"I think that the idea of connected or intelligent nodes that can handle things close to the edge of the network is tremendously important because that’s going to offload some of that network congestion and network complexity."

"That’s a real opportunity that we all should be aware of and thinking about, certainly in the semiconductor business, because this is the area for integration and for proliferating the technology into all layers.” 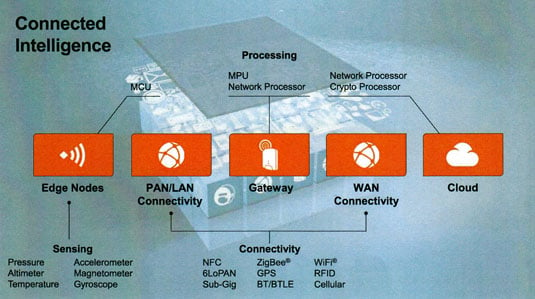 Compatibility is king? Connected Intelligence networking has a lot of different protocols to play with

So while connectivity is important, considerations for limiting what goes out to the network is going to have increased significance as each year passes. Also the intelligent node’s capacity to process incoming network instructions, to enable two-way traffic, as well as functioning autonomously are critical to advancing the usefulness of devices precipitating the Internet of Things.

The method of connectivity is another matter which Wainwright describes as a bit like alphabet spaghetti.

“You’ve got every possible portfolio known to Man; everybody competing for what’s the protocol going to be. The answer, from our point of view, is you have to be able to handle everything that’s thrown at you. You always find applications that have got different requirements, whether it be Sub-Gig, Bluetooth Low Energy and really, this is one of the big complexities that we have.”

Next page: Rip up your data centre blueprints
Page: