Japanese police have arrested a 27-year-old man after finding he had manufactured five handguns using a commercial 3D printer, two of which they say were capable of firing. 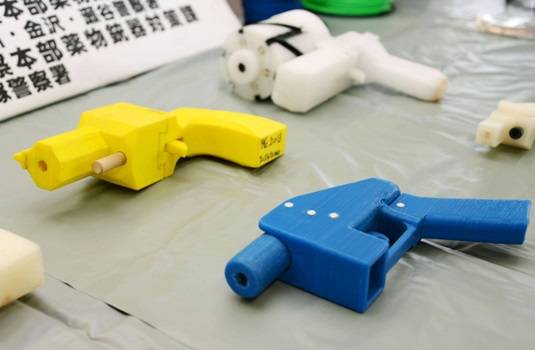 Guns they may be, but dangerous they aren't

Yoshitomo Imura, an employee of Shonan Institute of Technology in Fujisawa, made the guns using a 3D printer he bought online for ¥60,000 ($590) and plans downloaded from file-sharing sites. He posted video online showing off his printing skills, and promptly got his collar felt by local police.

"I produced the guns, but I didn't think it was illegal," Imura said, Japan Times reports. "I can't complain about the arrest if the police regard them as real guns."

While the police didn't find any bullets for the resin armaments, they are treating the matter very seriously. Japan has some of the strictest gun laws in the world – firing an unlicensed firearm will get you a sentence of between three years and life in prison, and getting a license requires a mental health assessment from a doctor, a drug test, a clean record, and a tricky safety test.

Japanese police are armed, but crack down on any gun violations severely, even in their own ranks. A few years ago a Japanese police officer used his service weapon to kill himself and was posthumously charged and convicted with breaking gun regulations. Even the local Yakusa gangsters eschew guns when possible.

As a result, Japan has some of the lowest rates of gun death in the world, with around 0.06 firearms fatalities per 100,000 people. Here in the Land of the Free, where pretty much anyone can own a gun with minimal oversight or training, that figure is 10.2 deaths per 100,000 people.

In Imura's case there was no suggestion he was planning to go on a killing spree with his 3D printed creations, and even if he did the chances are he'd be more likely to injure himself rather than anyone else.

While 3D-printed guns have been in circulation ever since a US hobbyist printed the Liberator handgun last year, they aren't exactly what you'd call a useful firearm – as El Reg's own armaments specialist pointed out at the time. Attempts to make a 3D printed rifle were even less successful after the barrel split the first time it was fired.

The fact of the matter is it's almost impossible to make a useful firearm out of the kind of resin commonly used in 3D printers. A US firm has 3D printed a handgun out of metal – and it proved more accurate than a machined firearm – but the cost of both the metal printer and the afterwork needed makes them prohibitively expensive.

Regulators across the world are nevertheless cracking down on the design and production of 3D-printed weaponry, and the hapless Imura looks likely to be spending a significant amount of time behind bars as a result of his printing shenanigans. ®

A metaphor for Brexit or IT admin's ineptitude?