Bang on the money

Hands on Motorola has followed up its hit Moto G comeback smartphone with a 4G version, and an even cheaper variant, the 3G Moto E, both revealed today. 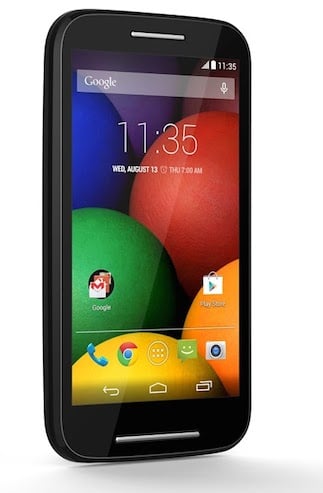 We got a chance to have a brief play with the new pair.

Last year, Nokia became king of the budget smartphones with its Lumia 520 Windows Phone – but Motorola's new 3G Moto E will bring this under severe pressure.

E is for entry level

The budget Moto Android experience is much better than you could buy a year or two ago. Landfill Android this Moto E ain't. In short, the Google-owned biz has produced a phone that Nokia used to make a decade ago: a durable and comfortable good-value mid-ranger with decent features.

You have to look hard to spot differences between the original G and the new E. All three models – the E, the original G, and the new G 4G/LTE – feature very similar styling: the E's 540-by-960-pixel display has an excellent density of 256ppi, and the 1,980mAh battery should comfortably see you through the day. The touchscreen is a tad sharper than the Lumia 630's 480-by-854 resolution, 218ppi density screen.

The E's 4.3in touchscreen means a swipe from the top – essential for Android – can just about be performed with the thumb, one-handed, by most users. Then again, I suspect many readers will install their own launcher, and most launchers allow you to flick down the Notifications panel without reaching for the top of the display.

The skimpy 4GB of internal storage in the E is complemented by a microSD slot that can take up to 32GB cards. That's a little disappointing, given the falling price of 64GB flash cards.

As with the original G, there's a variety of colours for the casing, and two types of Moto-branded cover: the standard removable cover, or a more grippy bumpy cover.

Visually, the main difference between the E and the original G is a chrome grill under the screen; the E uses Gorilla Glass 3, incidentally.

Moto hasn't skimped on the internals: in the E there's a dual-core 1.2GHz Qualcomm ARM Cortex-A7 Snapdragon processor and 1GB of RAM, but the result is snappy. It runs Android 4.4.2 (aka KitKat) with regular updates promised.

The absence of a heavy user-interface skin gives you zippy performance. Motorola Mobility – currently in the process of being sold by Google to Lenovo – says that compared to the more expensive Samsung Galaxy S4, the E answers calls 1.1 seconds quicker, launches the camera 1.7 seconds faster, returns you to your home screen faster by half a second, and launches the web browser almost a second faster.

So, what about the camera? Oh, best not to ask right now

Alas, the Moto E's 5Mp (2592x1944) camera performed abysmally in the low-light conditions chosen by Motorola to showcase the phone, in an obscure corner of Bermondsey, south London, today. We'll reserve judgment until we've given the cam a proper workout (in a few days) but, on this basis, low light use will probably involve gurning selfies as we squint at the screen.

The E will feature a few of Moto's own apps, but these are quite useful, and don't (unlike Samsung or Sony) muscle aside the stock apps. They include a rules-based personal assistant and, new here, an alert app that allows you to send emergency messages or allow a friend to find you. Moto makes its own camera and FM radio apps.