Space Station in CRISIS: Furious Russia threatens to BAN US from ISS

Hurry up, SpaceX – deputy PM to pull plug on cooperation 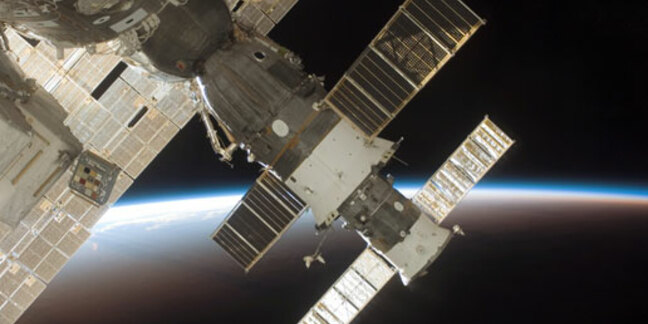 Updated The political standoff between the US and Russia over the latter's antics in Ukraine has put the future of the International Space Station (ISS) in doubt.

On Tuesday, Russian Deputy Prime Minister Dmitry Rogozin said his government will suspend cooperation with the US on international spaceflight efforts, including the sale of rocket components for satellite launches and transport to and from the ISS.

The deputy premier even went as far as threatening to ban Uncle Sam from using the ISS as the two super-powers squabble over American sanctions brought against Russia.

"These sanctions are out of place and inappropriate. We have enough of our own problems,” Rogozin told reporters.

He also claimed the United States cannot make use of the space station without Moscow's involvement: “The Russian segment [of the ISS] can exist independently from the American one. The US one cannot."

The politician then tweeted:

A decision by Russia to pull support for the ISS could cripple ongoing research efforts and threaten the future of the irreplaceable orbital station. While private exploration firm SpaceX has successfully sent unmanned cargo craft to the ISS, Russian Soyuz modules are today the only craft used to transport crews to and from the station.

NASA wants to keep the station operational until 2024 and possibly beyond; it will have to rely on the likes of SpaceX to taxi humans and kit to and from the orbiting lab if the Russians pull out in 2020.

Meanwhile, a Soyuz return trip from the ISS carrying three astronauts was said to be proceeding according to schedule, and should land early Wednesday morning GMT.

Moscow's tough talk on spaceflight cooperation came amid a series of comments from Russian officials on Tuesday regarding sanctions and diplomatic conflicts with Washington. The President Putin-led government cited the Ukraine-related sanctions as well as a fight over global positioning systems (GPS) in pushing Russia to end cooperation with the US.

"We've repeatedly warned our colleagues at the political and professional levels (via the Federal Space Agency) that sanctions are always a boomerang," Rogozin said in a statement.

"They always come back around and are simply inappropriate in such sensitive spheres as cooperation in space exploration, production of spacecraft engines, and navigation, not to mention manned space flights."

Earlier in the day, Rogozin said that Russia would be shutting down American GPS facilities within its borders after the US shot down requests to house stations for Russia's own GLONASS system.

Additionally, Rogozin said that Russia will not deliver its RD-180 rocket engines unless it receives a guarantee that the parts will not be used "in the interests of the Pentagon."

The United Launch Alliance, which recently was cleared to resume receiving shipments of RD-180s, could not be reached for comment. ®

This morning's Soyuz trip back to Earth was successful. The returning Expedition 39 crew had spent 188 days in space, orbiting our planet 3,000 times since they arrived in November.