Not IT Crowd Roy, Return on Investment. True AusCERT story

AusCERT The Australian Information and Security Association (AISA) is testing the security chops of 150 executives on Australian boards in an effort that may prove information security is only a "top priority" after a breach.

It will take most of the year for the association to phone the executives in some of the nation's biggest multinationals and ask them six questions about what they do and do not know about security, and quiz them on their concerns about breaches.

Only 10 executives have been polled so far, but the consensus appeared predictably bleak; executives knew little of information security and saw it as a pecuniary pit.

One unnamed executive went further, and told AISA board member Lani Refiti during an interview that he revoked the $6m security budget he approved each year because infosec geeks failed to produce evidence of return on investment when they most recently went hat-in-hands for funding. 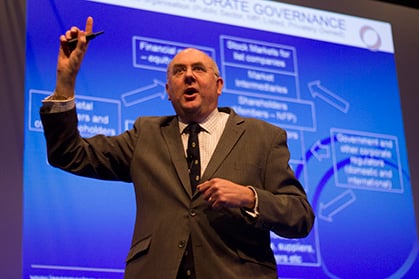 That board member had declined what was said to be necessary technology to comply with the Payment Card Industry Data Security Standard, telling security bods to "make do with what they had".

Lani said pitching to the board meant pitching specifically to existing members with a mind that execs only cared for projects that made their tenures look profitable.

Another interviewed board member shrugged off the risk of fines for non compliance under Australia's privacy reforms opting instead to pay the watchdog's fines that could reach $1.7m, a figure cheaper than the technology investment to keep the Commissioner happy.

Veteran corporate consultant and prolific board member John Masters said infosec bods would score resources if they pitched projects against the specific risk appetite of the board.

"[Approval] depends on where a potential breach sits within the specific risk appetite of a business," Masters told The Register.

"If they show ROI in this language, they will succeed."

Masters said this was a guaranteed ROI recipe.

He told delegates at the annual AusCERT conference on the Gold Coast that board members did not understand technology "gobbledygook" and were unlikely to throw money in the security black hole if they heard geeks speaking their native language.

At least one board seemed almost hostile, Masters recounted. He said a former top chief executive said he "would never [expletive] again" place a technology expert on the board after a failed experiment to bring IT up to the C suite.

He appealed to vendors to stop coming up with jargon words like "cyber" which confuses board execs. "When you say cyber, we think we're off to watch Star Trek," he said.

Return on investment was challenging but possible, according to Mark Stuart, software engineer at Dell Software, which flew this reporter to the conference.

"What is measurable to the business is downtime, for example a small business can tell you just how much eftPOS downtime will cost it," Stuart said.

He said security teams should present board members with easily consumable information spat out from their various security kits that contained only information executives would care to know.

Stuart has worked in the tech sector for more than 25 years. He said one customer helped prove infosec ROI by supplying his chief information officer with reports on the number of blocked attacks, with estimated costs should those breaches have been successful. ®

Darren Pauli travelled to AusCERT as a guest of Dell Software.