Chinese manufacturer Xiaomi, whose CEO models himself on Steve Jobs, has released a tablet the same size and shape as an iPad mini with the somewhat-derivative name Mi Pad. 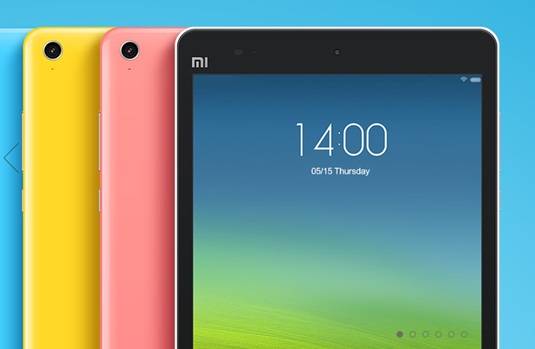 The Mi Pad has a 7.9-inch screen with a resolution of 2048-by-1536 – the same resolution as the iPad mini with Retina Display. It includes front and back cameras, Wi-Fi and a plastic casing complete with rounded corners. There are two models, running 16GB or 64GB of internal memory, and the lowest cost model will go on sale this summer in 10 Asian countries, with Chinese buyers paying 1,499 yuan ($241) for the base-spec model.

That's about half the price of an iPad mini with Retina Display in China, and the Xiaomi fondleslab won't be running iOS of course, just the latest Android operating system. But Xiaomi's big boss Lei Jun made it clear other Android tablet makers aren't his first target.

"We wanted the hardware to come close to, or even surpass Apple's iPad," he said at the launch event in Beijing, Reuters reports.

The new tablet is especially good news for Nvidia, since the Mi Pad uses the company's Tegra K1 processor. The chip firm has been suffering of late from a lack of sales in the fondleslab sector and the Xiaomi account will be very helpful to Nvidia's bottom line.

Xiaomi is one of the fastest growing electronics manufacturers in China – the fastest growth market for such products on the planet. The firm has been around for less than four years, but has already built itself up into a major player and multi-billion dollar firm.

Lei Jun said that he was inspired to start the company after reading a book about Steve Jobs in college in 1987, and he has aped the late Apple supremo's dress style of jeans, running shoes, and black tops.

But unlike Jobs' firm, Xiaomi has focused on selling hardware that doesn't cost too much – but looks very stylish – and then making money on services over the lifetime of the product.

No doubt Apple's lawyers are going to be looking very closely at the Mi Pad. Given the amount of time and money they have spent hammering Samsung with legal actions over its fondleslabs, such a blatant rip-off is going to have the legal eagles sharpening their claws.

But at the launch, Xiaomi vice president Hugo Barra said that the company had no immediate plans to enter the US market, and Chinese courts are going to be a much tougher nut to crack than those in Europe and the US. ®

US, Europe move to secure access to Taiwanese tech