Cloud computing is FAIL and here’s why

Stick that online service up your SaaS

Something for the Weekend, Sir? Adobe’s spectacular FAIL over the last 48 hours confirmed, rather than revealed, cloud computing to be so unreliable as to be positively dangerous. Cloud computing is shite. It takes over everything you’ve got, then farts in your face and runs away giggling.

For those readers blissfully ignorant of what us media production types had to put up with between Wednesday evening and the early hours of Friday morning, Adobe’s login services were down during this brief period. Across multiple continents where Adobe software is used, customers were being beaten back by errors telling them their "Adobe ID" login credentials were incorrect.

Yes, I know that doesn’t sound like much. Indeed it’s insignificant compared to, say, the meaning of existence. Yet the knock-on effect of being unable to log in to software that increasingly demands you to keep logging in simply to persuade it to run is problematic, I hope you’ll agree.

Eventually, this little "Houston"-style message popped up on Adobe’s Creative Cloud website, admitting something was up. 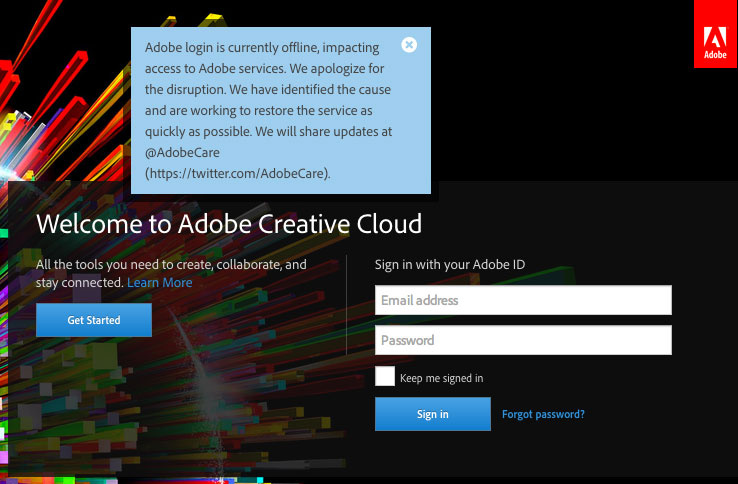 I ought to have seen it coming: Adobe’s Creative Cloud desktop app had kicked me off its system twice through the course of the afternoon and evening, and eventually refused to let me log back in at all.

While waiting an uncharacteristically long time for an Adobe support dude to join me in the chat pod, it was repeatedly suggested to me that I should check for solutions on the company’s online support forums. I duly complied, only to discover that no one at all had complained on any of the Adobe support forums about not being able to log in with their Adobe IDs.

Ah, that’ll be because you need to log in with your Adobe ID in order to post on the forums. It’s like when you have to phone your telephone company to tell them your line is dead but you can’t because er... your line is dead.

Or to use a motoring metaphor, it wasn’t so much like having your car battery go flat on the motorway so much as like having someone snatch your car keys from your hand and throw them into the river. Adobe has offered to walk 400 miles down the hard shoulder to fetch the spare keys. All we can do wait outside the car.

At this point Adobe began telling irate Creative Cloud subscribers via its Twitter feed that they could circumvent the entire CC authentication system by temporarily pulling the plug on their internet connections and relaunching the apps. This apparently forces Adobe software into thinking that you’re on a train or gone off to the sticks on holiday and triggers a 30-day grace period during which you don’t need any of that internet cloud bollocks to keep up and running.

Brilliant, that. Running unauthenticated software? Pull the plug out the back and it’s yours free for a month!

Except... what if you’re just returning from a 30-day stint in the sticks beyond the evil influence of the maleficent interwebs? You’d have got back to your desk, fired up your Adobe software and seen a lovely big message reading "Trial period over" inviting you to subscribe to Adobe Creative Cloud even though you already do and then resolutely refusing to allow you to log in to tell it so.

Worse, Adobe’s pre-CC apps were not offering 30 days of grace but a paltry seven. My copy of InDesign CS5.5 told me I had just one week’s notice of my imminent digital emasculation, and that’s a program I own outright rather than "subscribe" to.

Now hang on, I thought. Adobe has chained just about everything it does to Adobe ID logins: not just authentication but a raft of software-as-a-service apps that only exist in the cloud. These are back-end, mission-critical production and data reporting apps, not the fun creative desktop stuff that Adobe is more famous for. Stuff Creative Cloud, what about...? Oh dear.

Some of you no doubt will be pleased to read this but at least one national newspaper failed to publish its Adobe DPS-based tablet edition on Thursday morning as a result. 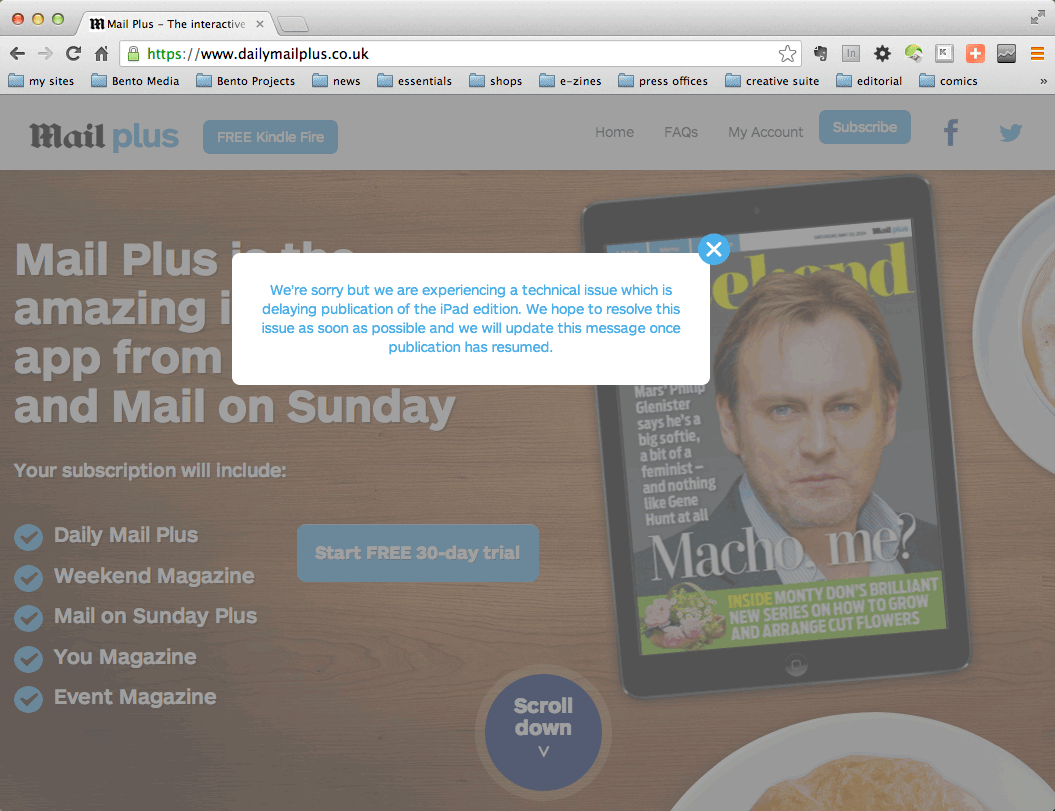 Adobe has now blamed the outage on botched database maintenance.

Back in the old days of print publishing, if your printing press broke down, you just put the job on another printing press. But here the cloud servers hadn’t broken down as far as I can gather, so it wasn’t a matter of switching to other servers. The problem was that we couldn’t get to them, upload any to them or publish through them simply because our metaphorical car keys were, like Luca Brasi, sleeping with the fishes.

Luca Brasi sleeps with the fishes

The problem as I see it is that cloud computing is essentially unattainable. Sure, it’s a lovely idea but it’s not so much a technology as a salesman’s pitch. And as with all sales pitches, it promises you the world and tries to keep you happy with a few clods of turf.

It’s a technology that ought to work, but it only works when it ALL works, if you get what I mean. If one little piece of the jigsaw goes awry – just the internet access or just the logins, for example – the entire systemology goes titsup.

Cloud proponents want you to think of "the cloud" as a lean vision of the future when it’s effectively a present-day fat bloke in pebble glasses. The concept wants to be William Gibson when we know it’s Irvine Welsh. Cloud computing is little more than a cool, sexy concept mired in the grungy buggeration of reality. And that’s why it will continue to FAIL. ®

Alistair Dabbs is a freelance technology tart, juggling IT journalism, editorial training and digital publishing. He is always critical of brilliant technology while it’s in its infancy: not just cloud computing but 3D printing and those apps on your tablet that let you remote to apps on your notebook that's sitting in front of you. Easy targets, the lot.