Reminder: The maths is good, it's the implementation that sucks

AusCERT History is filled with companies shamed by their shoddy cryptography implementations – even though the underlying maths is bang on.

In a presentation titled "Crypto Won't Save You" at the AusCERT conference on Australia's Gold Coast, respected cryptographer Peter Gutmann of the University of Auckland took security bods through a decade of software hacks and network breaches featuring a laundry list of the world's biggest brands.

Gutmann's point was to highlight how the weakest link in cryptography is typically in the implementation rather than the mathematics involved. He demonstrated that consumer devices from the Amazon Kindle to the Sony Playstation and Microsoft Xbox consoles were hacked not because of weak cryptography, but due to poor deployment of security mechanisms, which were bypassed by attackers.

Many more systems have been broken due to poor implementations. The crypto used by lower-end ransomware to encrypt victims' files can be broken by security pros, allowing the documents to be rescued without having to pay the ransom.

"No matter how strong the crypto was, the attackers walked around it," the Cryptlib developer told delegates.

"Crypto is not any good to you when it can be so easily bypassed. The lesson is you need to secure every part of the system and not just throw crypto at one bit and assume that you'll be safe." 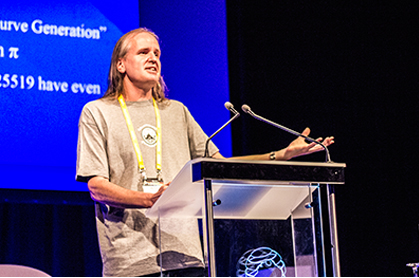 Gutmann highlighted further crypto bypass gore by pointing to the use of weak keys in DomainKeys Identified Mail (DKIM) by thousands of organisations including of Google, Paypal and Twitter.

While the US Computer Emergency Response Team (CERT) warned companies in October 2012 to upgrade to stronger keys to avoid being popped, Gutmann said attackers took the easier route and bypassed the implementations.

"There were so many other ways to render DKIM ineffective that no one bothered attacking the crypto," he said.

The prevalence of bypasses was a boon for the likes of the US National Security Agency, according to the Kiwi boffin. He rehashed the NSA's Bullrun program, which attempts to insert backdoors into hardware and software. It's believed the agency was responsible for backdooring the Dual EC DRBG algorithm used in various security products, for instance.

Gutmann said the spy agency and its allies could be warded off with properly implemented cryptography, and that new "NSA-proof" protocols were not needed.

"We don’t need any new NSA-proof protocols. Any well-designed, appropriately-deployed protocol is NSA-proof," he said.

Full disclosure: Darren Pauli travelled to the Gold Coast as a guest of Dell