The companies who oppose net-neutrality regulations are pumping far more resources into their lobbying efforts than those who support the measures.

This is according to the Sunlight Foundation, a non-partisan government watchdog that has tracked both spending and lobbying reports on the issue in recent years.

The group said in a blog post, issued shortly after the FCC announced its proposal for new net neutrality regulations, that the top donors opposed to stronger regulations – including AT&T, Verizon, and Comcast – outspent open-internet advocates such as Google at a rate of more than three to one.

"While the dispute over network neutrality is often thought of as a battle between giant corporations, it's clear from the data that over the lifespan of this issue, the pressure has been far from equal," the Sunlight Foundation said. 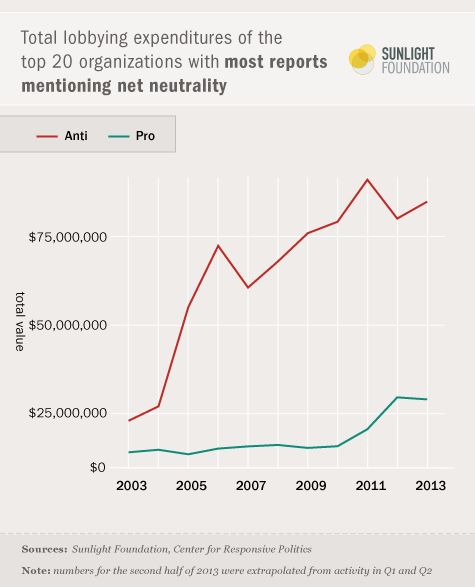 Hardly seems to be a fair fight, eh? That is, if you believe lawmakers can be bought ...

Carriers naturally have been opposed to the FCC plans, which they feel put constraining and unnecessary government regulations on their businesses and industry, while net neutrality advocates say government intervention is necessary to keep operators from creating tiers of service in which users are subjected to deliberately throttled or prioritized performance of certain platforms and services.

That is not to say that net neutrality has not been without its own powerful backers. Earlier this month a who's-who list of tech companies including Amazon, Microsoft, eBay, and Netflix publicly came out in support of net neutrality efforts. Google, which has been an outspoken advocate, was listed by the Sunlight Foundation as the second-largest spender, pouring more than $18.2m into pro-neutrality lobbying.

However, the Chocolate Factory was the only one of the top five spenders to support net neutrality. The National Cable and Telecommunications Association claimed the top spot, spending $18.8m, while AT&T, Verizon, and Comcast racked up spending tallies ranging from $17.4 to $14.6m. ®