Four 4K displays not enough for you? A li'l tweak and – voilà! – you've got nine

AMD has released the second generation of its R-Series chips, code-named "Bald Eagle", aiming them squarely at the high end of the embedded market.

What segments might those be? How 'bout arcade and casino gaming, medical imaging and imaging-assisted surgical systems, ultrasound, industrial control and automation, military and aerospace applications, retail signage, video walls, machine vision, and surveillance [Like we need more of that.—Ed.].

In addition, AMD says, the highly parallelized nature of such tasks as deep packet inspection, encryption/decryption, compression/decompression, and search will make Bald Eagle's GPU grunt a natural match for a broad range of communication and networking kit, from switches to routers to internet-of-things infrastructure.

Nearly kicked to the curb at the turn of the last decade, AMD has been talking "transformation" since former Lenovo Group prez Rory Read came aboard in August 2011. Since then, the company's serial successes in embedded processors, game-console semi-custom chips, nascent ARM server chips, and other market segments have lifted it off the mat and returned it to relevancy.

Give credit where credit is due. And credit is due to Read and his team for understanding that the hegemony of x86 client and server chips is fading as burly microprocessors increasingly appear in everything from one-armed bandits to your next pair of trousers, and for focusing on the five "high-growth markets" that Read never tires of repeating will contribute over 50 per cent of the company's revenue by the end of 2015: semi-custom chips, professional graphics, new form-factor clients, dense servers, and embedded. 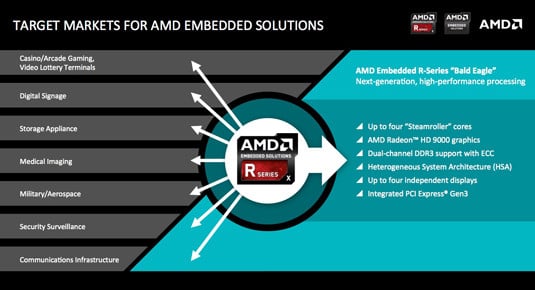 AMD's embedded honcho Scott Aylor told The Reg that the market for higher-end embedded processors is a big one, indeed: think in the $9bn range. It's also dominated – we'll call 83 per cent "domination" – by x86 and ARM chippery, both of which, of course, being part of AMD's "ambidextrous" x86/ARM strategy. The other 17 per cent, Aylor said, are "legacy architectures like PowerPC and MIPS that are on the decline."

To snag their share of the high end of the embedded market, Aylor's engineers – on paper, at least – have produced a rather versatile birdie with Bald Eagle. It's not your daddy's embedded microcontroller or microprocessor, but a full-on x86 APU – accelerated processing unit, AMD's term for its CPU/GPU/whatever mashups – and will support Linux, Windows, and real-time operating systems (RTOS).

This raptor has two or four of AMD's new "Steamroller" CPU cores, plus up to eight GPU cores that use the company's Graphics Core Next (GCN) architecture and are based on the Radeon HD 9000 platform. 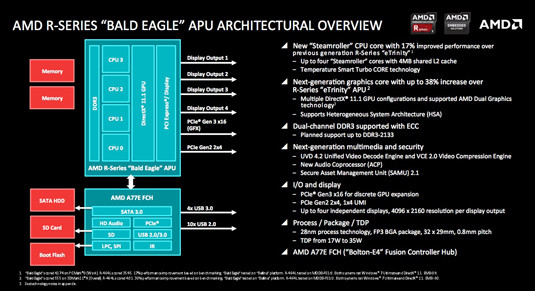 If the word 'embedded' makes you think of wimpy chips, it's time to think again (click to enlarge)

Bald Eagle also enables heterogeneous system architecture (HSA), which first appeared in AMD chippery in its desktop Kaveri APUs this January, and which allows the CPU and GPU to share the same system memory, vastly simpifying the programming challenge of getting GPUs to shoulder the parallel-processing chores that they excel at far better then CPUs.

Speaking of system memory, Bald Eagle has dual-channel DDR3 support at up to 2133MHz, along with the error-correction code (ECC) memory support and a promise of 10-year support longevity, both important for many embedded applications.

The video and graphics capabilities of Bald Eagle – or, more prosaically, the 2nd Generation AMD Embedded R-Series APUs – give an indication of some of the use cases at which it is targeted. It supports 3D, 4K, and HD video content, and up to four independent displays at 4096-by-2160-pixel resolution per display. If that's not enough for your installation, add an AMD Embedded Radeon E8860 discrete GPU and you can bump that up to nine displays.

The 2nd Generation R-Series APUs come in five flavors in a variety of CPU, GPU, and other configurations – including two without GPU cores, so you can forget about HSA implementations with those. Squint at or click on the table below for details:

As Read has said, AMD's new strategy is "ambidextrous", and so Bald Eagle is just the x86 half of its next generation of higher-end embedded processors. Expect AMD's next big bird, "Hierofalcon", to bring ARM to the party – specifically four to eight beefy ARM Cortex-A57 cores – later this year. ®