That's right, Cisco is an 'outcomes and results' company now

Cisco CEO John Chambers says customers should expect significant consolidation in the networking industry, even as his own company strives to move into new markets.

Chambers, who has spent the last 19 years as Cisco's chief exec, used his Monday afternoon keynote address at the Cisco Live! conference in San Francisco to make the case that Cisco is transforming into a company that delivers "outcomes and results," rather than mere products.

Key to this transformation, he said ­– naturally – is the company's latest mega-buzzword, the Internet of Everything (IoE), of which Chambers said every other vendor's "internet of things" is but one small, yet significant part.

But Cisco isn't quite there yet, he said. IoE is still in the future. What Chambers said Cisco is working on now is delivering application-centric infrastructure (ACI), where it offers tightly integrated solutions that are engineered from the application level, down.

Cisco still expects to face competition from so-called white box vendors with hardware running open source software stacks, particularly in the cloud infrastructure arena. But according to Chambers, the networking giant isn't worried about competitors selling kit with comparable features to Cisco's at a lower price. 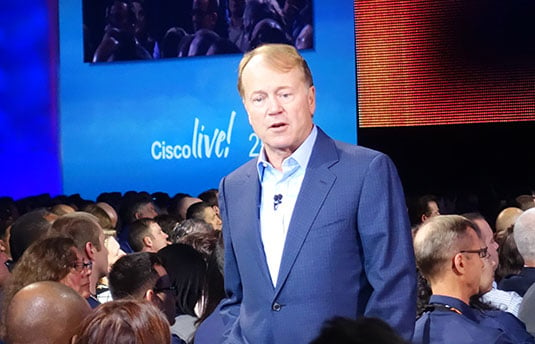 "The infrastructure is commodity," said Bryson Koehler, executive VP and CIO of the Weather Company, a Cisco customer that was dutifully trotted out for the occasion. "It's complete table stakes."

More than boxes, Chambers said, what customers are looking for now are solutions designed to address their specific business needs, and companies that just sell standalone products will be in trouble.

Cisco only moves when there's a significant market transition, Chambers said, and by extension companies that don't move quickly may not survive. "And I don't want to mislead you," he said, "we're not moving fast enough."

But if the industry is consolidating, Cisco has been doing its part to facilitate that by snapping up smaller competitors. And while Chambers admitted that not every acquisition the company has made has been successful, he pointed to five – Insieme, Intucell, Meraki, Sourcefire, and Whiptail – that are "all going well."

The Whiptail acquisition in 2013 saw Cisco add storage to its offerings, and the Sourcefire purchase made it a security company – and to hear Chambers tell it, the networker is now "very close to becoming the number one player in security."

The security business isn't quite like Cisco's traditional networking mainstay, however. Increasingly, security is delivered as a service, and Chambers said we should expect Cisco to be "more and more about services" as time goes on.

He also said that Cisco plans to move its custom ASICs – which he described as a key competitive advantage over companies that build hardware using stock x86 silicon – into "every single device" the company makes, all the way down its product lines. 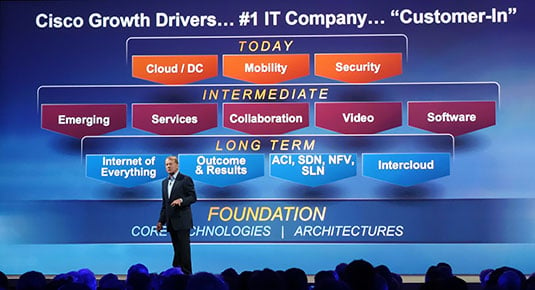 "Intercloud" technologies that link customers' private clouds with public cloud infrastructure are also high on the agenda, he said, and Cisco plans to become the leading vendor of so-called hybrid cloud tech.

The networker is also focusing on what it calls "fog computing" – another buzzword for you to remember – which is its term for the tech that facilitates what happens inside cloud data centers. [I think we used to call this "IT" – Ed.]

In the long run, Chambers said, Cisco's goal is to facilitate "self-learning" networks that can adjust their behaviors dynamically based on predictive analytic models. Software-defined networking will be key to this model, he said, adding that "we will lead [the SDN] industry."

In a nutshell, Chambers' keynote set the expected positive tone to kick off this year's Cisco Live!, the 25th such event in the company's history. Which is all well and good, but your humble Reg hack can't help but note that Cisco shareholders must be getting antsy after several quarters of disappointing real-world earnings and lackluster real-world growth.