A deskbound touchscreen tablet is apparently what everyone wants

In the face of some tough quarters, Cisco has used its Cisco Live event to show its bold vision for the future: a $US1,500 big-screen Android tablet with webcam, noise-cancelling audio, apps, and multi-user logins.

As we all know, Cisco's business is hardly buoyant at present. So with the big box business flat, The Borg has gone in search of a volume market it believes it can dominate.

Cisco thinks that market is in replacing PCs with a “CEO-level” tablet on every desk, and is pinning its future on the 14-inch DX70 and 23-inch DX80. It says the devices provide “... access to all the top tools and applications highly collaborative work requires. While this integrated desktop experience is fit for a CEO, it is priced to scale to every worker”.

Maybe El Reg is reading this bassackwards. Maybe it's not a $1,500 embiggened tablet. Maybe it's a $1,500 Webcam with its own screen, running Android so you can install apps on it. 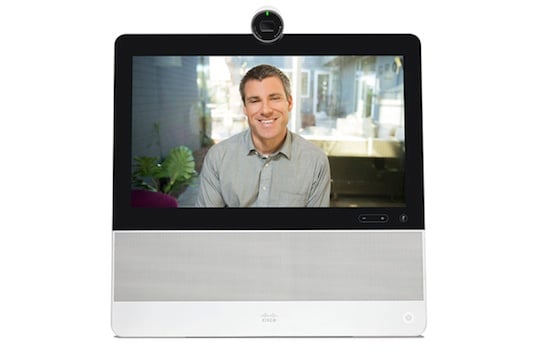 It gets better: Cisco says the device is the product of "Scandafornian" design, which probably means it mashes up IKEA and and the iPhone.

The problem facing Cisco is clear enough: the world of cloud and software-defined networking (SDN) is upsetting its core business, namely building boxes that are great at pushing packets. While the cloud is driving plenty of traffic and will continue to do so, emerging architectures – SDN and its bosom-buddy, network function virtualisation (NFV) – is eroding prices.

With astonishing rapidity, network control functions that used to be the preserve of proprietary hardware are migrating outwards to racks of white-box servers.

While The Borg is reportedly upbeat about the future of high-end kit like the NCS and CRS-X core routers, its income is also under pressure from lower-cost competitors like Huawei and ZTE, particularly in markets like Brazil, Russia, India, China and Mexico.

And its answer, again? To try and get enterprise buyers to replace PCs with premium-priced purpose-built Android tablets.

We're sure they're very nice premium-priced, purpose-built Android tablets, but it's also apposite to note that The Borg has previously tried to turn collaboration into a growth engine without colossal success.

In 2009, it figured that its very nice telepresence technology would revive the world's interest in public teleconferencing facilities, and set up an ill-fated arrangement with Marriott to offer just that. The service lasted until 2012, although some other partners like Telstra in Australia still exist.

On the desktop, Cisco talked up IP phones as a fine place to run small apps. While that idea did see it sell lots of handsets at prices well above those commanded by previous-generation desk phones, few if any developers ever bothered to code for the devices.

At the other end of the market, Cisco's Ūmi home-user telepresence kit – here if you need a reminder – fell off the twig in 2012.

Its last shot at a tablet, the Cius, also bit the dust in 2012, and even when it had a popular consumer-grade gadget, the Flip HD videocamera, it couldn't shift enough units to keep it alive.

Which brings us to another foray into the low-end market: Linksys, bought in 2003 and offloaded in 2012.

A dedicated – sorry, nearly dedicated, since it can run Android apps – tablet seems unlikely to beat The Borg's previous forays into such technologies.

The fact is that any user actually sitting at the corporate desktop already has a corporate laptop, and even low-end laptops have HD webcams and may well have second screens. Away from the desk, the game is about piping apps – and data – all the way into peoples' hands, either in phones (that cost less than the DX devices) or tablets (also mostly cheaper than the DX devices). And since when were enterprises keen to add a whole new device to the business desktop?

Did we also mention the train wreck that is Windows 8, and the non-stampede towards touch screens in the enterprise?

While we're on MIcrosoft, it last week added ten-person video calls to the list of stuff Skype does for free. That must have hovered like Banquo's ghost at the edge of the Cisco Live conference stage. ®

If you're using older, vulnerable Cisco small biz routers, throw them out