Supersized storm may spin out by 2030

NASA recently released the images below comparing the spot's size in 1995, 2009 and 2014. Boffins there believe that 19th-century observations of the Spot pegged its widest point at around 41,000km. By the time the two Voyager craft cruised past in the 1980s that was down to 23,000km.

Recent Hubble Space Telescope images suggest it may be just 16,000km across, and observations support a theory it is shrinking by perhaps 1000km a year.

Theoretical astrophysicist and cosmologist Alan Duffy has opined that the Spot might be losing energy as it encounters other storms spinning in the opposite direction. 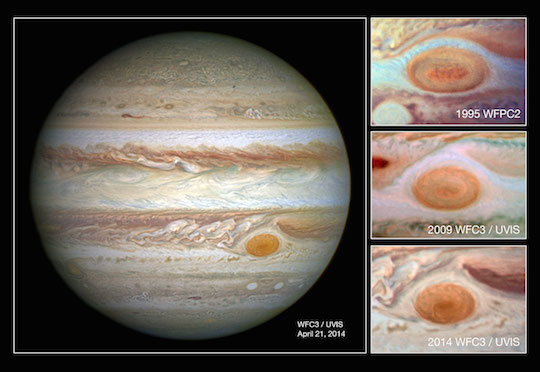 His guess is as good as any: we know the Spot has been around for about 400 years but don't know why or how it formed or is sustained. What we do know is that it is still comfortably large enough to swallow the Earth, yet accounts for a tiny part of Jupiter's surface area. Even at its diminished size it therefore retains the power to make us all feel utterly inconsequential. ®