The fourth generation K2 product topped the SPC-1 random IO and SPC-2 streaming IO storage benchmarks, and the Vulture expects that the Gen 5 product will do so as well.

The fifth gen K2 has an active:active dual controller design with non-disruptive upgrades and "five-nines" of availability.

A K-Block has two active:active 1U K-Node controllers (servers) interconnected with InfiniBand, and a 2U shelf holding 24 SSDs A 2U expansion shelf can hold another 24 SSDs. The latency is less than 0.35ms and the throughput is 3.2GB/sec. 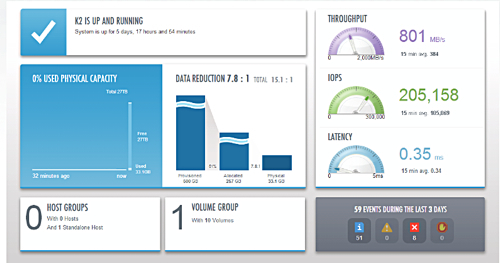 Customers would scale up within a K-Block for added capacity and scale out for adding both capacity and performance. Data and metadata are distributed across the K-Blocks and performance is said to scale linearly; with about 250,000 random read 4K block IOPS per K-Block, as K-Blocks are added, with automatic rebalancing of data and metadata across the K-Blocks to equalise the workload.

Kaminario's chief product officer, Ritu Jyoti, said in a statement: "K2 minimum net capacity is 7.4TB which is gained by 24 SSDs of 400GB (24 x 400GB of raw capacity) and we apply RAID and Over Provisioning overhead to it. This is of course net, before data reduction."

Kaminario only uses full shelves of SSDs (24 per shelf).

A fully configured K-Block with 48 x 800GB SSDs would have 38.4TB of raw capacity, which Kaminario says provides up to 90TB of usable capacity.

There can be up to eight InfiniBand-linked K-Blocks in a single storage pool offering up to 2PB of effective capacity, 2 million IOPS and 25.6GB/sec bandwidth.

According to Jyoti Kaminario "will qualify higher configurations in the near future according to customer needs." Also; "In the future we will certify more storage shelves per K-Block."

Host servers connect across 8/16Gbit/s Fibre Channel or iSCSI 10gig Ethernet and there is an Ethernet interface for management.

The inline deduplication is selectable by workload; turn it off for databases for example, and is global, working across a set of K-Blocks.

One customer, Shai Toren, general manager at Intigua, claimed: “K2 v5 enables us to reduce costs to under $2 per usable GB since we’re able to minimise the average amount of storage that is required for each VM... We were able to deploy over 7,000 virtual servers on a single K-Block configuration of K2 v5, with a data reduction rate of 20:1.”

Controllers and SSDs can be mixed and matched and upgrades are non-disruptive. There is a guarantee that Kaminario will provide free hardware if a customer's guaranteed effective capacity needs are not met.

Kaminario claims K-RAID provides 87.5 per cent utilisation. With this, the replication and the point that the array's components are hot-swappable, Kaminario is sending out a message that its flash array is enterprise class in the data reliability stakes, a high performer, and cost-effective vs disk drive arrays, and estimated its average pricing as being about $2/GB of effective capacity.

Kaminario claims that comparatively, the K2's rival products lack compression; some of their metadata is held in RAM and is neither cached nor adaptive to the block size; they lack snapshots and replication or both; lack scale-out growth; do not have operational dedupe when workloads are high; the controllers are only active:passive; and that their cost is far north of its own.

Kaminario says its gen 5 K2 array comes with all-inclusive software pricing, and are available now, except for replication which will come in the second half of the year. Pricing starts at around $70,000. ®

* Usable capacity is calculated after deduplication and compression. Obviously it can vary with different applications and workloads.