You know all those resources we're about to run out of? No, we aren't

We seem to have an infinite supply of bullshit, too

Comment Among the more surprising things that the BBC revealed to us last week was that the UK was going to run out of coal within the next five years. Given that the island is pretty much built on a bed of coal, this is something of a puzzler. 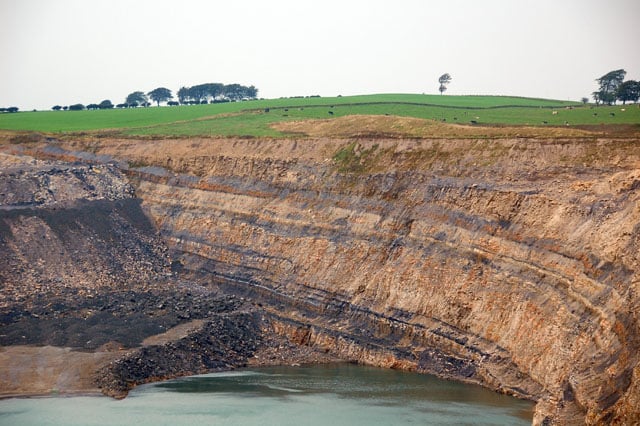 Coal seams in the rock at Broken Cross Muir coal mine. Pic by Greg Morss, under Creative Commons licence

In just over five years Britain will have run out of oil, coal and gas, researchers have warned.

A report by the Global Sustainability Institute said shortages would increase dependency on Norway, Qatar and Russia.

As your intrepid mineral resources correspondent (aka El Reg's dodgy metals dealer) I thought I'd better have a look at the report that claimed this. As it happens, it appears to be an update of maps to this report from last year from the Institute And Faculty Of Actuaries that led to the claim.

Given my background, obviously I looked at the minerals rather than the fossil fuels part of it. And in this writer's opinion I have to say that the people who wrote it betray a baffling ignorance of the subject under discussion.

They appear to work under the impression that mineral reserves are somehow the definition of the number of minerals we have left to us, when in fact reserves are the working stock of extant mines (more or less). They also seem confused about mineral resources, which are the piles of stuff where we know their location, how to get them out, that we can do so while making a profit at current prices and with current technology, though we may not have got around to proving that to the required legal standard. When we have proven it, they will move from being resources to reserves.

Given that phosphate rock and potassium as resources are good for 1,500* and around 7,000** years to therefore claim that, as this report does, that they were in very scarce supply in this last decade just gone is thus, well, it's not very accurate is it?

Given that the two are also 0.2 per cent and 2.5 per cent of the entire crust of our planet the idea that we'll ever run out of either with future technologies also seems a tad suspect.

And then I spotted this one. It's a piece from New Scientist, a place I was knew as a seriously interesting magazine (Dedalus certainly used to make me larff).

Without more recycling, antimony, which is used to make flame-retardant materials, will run out in 15 years, silver in 10 and indium in under five. In a more sophisticated analysis, Reller has included the effects of new technologies, and projects how many years we have left for some key metals. He estimates that zinc could be used up by 2037, both indium and hafnium - which is increasingly important in computer chips - could be gone by 2017, and terbium - used to make the green phosphors in fluorescent light bulbs - could run out before 2012.

This prediction was made in 2008. You recall how Apple stopped shipping iPads last year as the indium tin oxide to make the screens ran out? That we've been completely bereft of CFL lightbulbs for two years now as the terbium disappeared? No and no? Exactly.

For a metals guy, the one that stands out most is that reference to hafnium. It betrays a complete and total ignorance of how mining actually works. It's true that there are no mineral reserves of hafnium, nor are there any mineral resources. So, our guys looked at what was in stockpiles, saw there were no reserves nor resources and concluded that it will run out.

However, "resources" and "reserves" are a legal and economic description, not one of actual availability. And given that Hf doesn't form any interesting ores, we can't go digging for it and make a profit by having done so. This is not the same as stating that there's not plenty available though.

For when we go digging for zircon (the mineral sand) from which we extract zirconia (the oxide) and ultimately zirconium (the metal), we find that it contains two to four per cent Hf. We don't care though, Zr and Hf are so chemically similar that we just don't bother to separate them.

Except when we try to make nuclear-grade Zr: then we do care because Zr is transparent to neutrons and Hf opaque. So, to make those fuel rods for reactors, we extract the Hf from the Zr: and that's where the global supply of some few hundred tonnes a year (perhaps 500) of Hf comes from.

Take the metal gallium, which along with indium is used to make indium gallium arsenide.

This is the semiconducting material at the heart of a new generation of solar cells that promise to be up to twice as efficient as conventional designs. Reserves of both metals are disputed, but in a recent report René Kleijn, a chemist at Leiden University in the Netherlands, concludes that current reserves "would not allow a substantial contribution of these cells" to the future supply of solar electricity. He estimates gallium and indium will probably contribute to less than 1 per cent of all future solar cells - a limitation imposed purely by a lack of raw material.

Sigh. Gallium is another one of these byproduct metals. We can't get it directly and profitably.

Fortunately we mine for aluminium by sticking bauxite into a Bayer Process plant, where we boil it in caustic soda. If you put the right doohicky on the side of this plant then you get the gallium out. It's at about 100ppm, 100 grammes per tonne of bauxite processed. Some 8,000 tonnes a year passes through those plants, which is useful because only a few of those BP plants have the doohickeys and globally we only use around 400 tonnes of gallium a year. And yes, we do know that there's around a 1,000-year supply of Ga in the bauxite that we already know that we'll process for the aluminium content.

We simply don't have any meaningful shortage of these metals that they're worrying about. And our new report produced for the actuaries uses these older reports as the basis of its concerns.

And, as all good techie people know, GIGO. If the information you're feeding into your process is bollocks then your output is going to be bollocks, and not of the he3 hi-niikoo'owu'u-no kind.

**Based on 250 billion tonnes of global resources remaining as estimated by the US Geological Survey, at current global yearly usage rate of 33 million tonnes a year (PDF)

Next page: We get it, you care about the planet. But don't make alarmist nonsense about resources the basis of your arguments
Page: